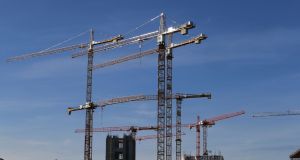 The 10-year National Development Plan provides for investment of €5bn in the higher- and further-education sector over the next decade. File photograph: Nick Bradshaw/The Irish Times

The capacity of higher-education institutions to manage large-scale construction projects has been called into question by a spending review.

The review shows major buildings have consistently been delivered late and with cost overruns of tens of millions of euro. The Comptroller and Auditor General report examined 10 projects delivered over the past decade at a cost of €350 million. It found that, cumulatively, they ran almost €70 million over budget.

In addition, they were delivered about a year late, on average, with delays on individual projects ranging from three months to almost four years.

The bulk of funding for these projects came from the taxpayer or exchequer sources, with the balance from philanthropic donations and loans.

The single biggest cost overrun was recorded at the €92 million Trinity Biomedical Sciences Institute, which ran almost €17 million over budget. It was delivered three months late.

The longest delay was recorded at NUI Galway where a bundle of three buildings (science, arts and clinical research) was completed almost four years (45 months) late. The €60 million project also recorded an overrun of almost €16 million.

The review found that tender evaluation was one of the most common weaknesses.

Six projects had cost as the sole criterion for awarding contracts. However, three had to be retendered due to the financial failure of the selected contractor.

The most common issue during contract execution was changes to scope of the project.

In some cases, states the report “ambiguous and incomplete documents” contributed to disputes with the main contractor.

In several others, there were significant numbers of design changes, even though these should only be issued for essential requirements that were unforeseeable prior to tender.

Some nine of the 10 projects ended up in a dispute resolution process, which can be expensive due to legal and professional fees. In one instance, Athlone Institute of Technology incurred legal and other professional fees of €3.3 million in relation to resolving contractual disputes over its €30 million engineering building.

In most instances, third-level colleges identified learning outcomes that could be used on future projects.

However, the report stated it was “unclear if these learning outcomes are shared across the sector”.

“Overall, there may be a lack of capacity within the higher education sector to manage large scale capital projects,” the report found.

“A rigorous risk assessment should take place at the outset with the objective of ensuring that qualitative factors are more explicitly considered at tender evaluation; detailed work requirements are in place; and change orders are limited.”

It added: “There may also be a lack of capacity within the higher-education sector to deal with disputes once they enter a formal conciliation/arbitration process.”

The findings are timely given that the 10-year National Development Plan provides for investment of €5 billion in the higher- and further-education sector over the next decade. The bulk of this sum represents taxpayer or exchequer funding.

The report provides several recommendations, including a provision that cost alone should not be the deciding factor in awarding contracts. Instead, public bodies should assign an appropriate weighting to qualitative criteria at the award stage.

In addition, it notes the Office of Government Procurement should provide additional guidance to public bodies to ensure that a robust review of the financial stability of shortlisted firms is carried out.

The report also states that the Higher Education Authority or Department of Education should establish a centre of excellence to advise and assist colleges in the delivery of large capital projects.