iPads in schools: ‘They don’t learn as well using screens... They’re too distracted’ 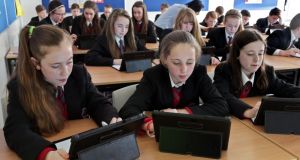 Angela Kaya, a mother of three from Co Meath, watched her eldest daughter go through the Junior Cycle using an iPad to learn, instead of books.

Now that her youngest child is due to start at the same secondary school, she is determined he will not face the same experience.

“I know they’re seen as trendy and the way forward, but they are spending too much time on screens,” she says.

“They don’t learn as well, or retain as much using screens. They can’t take notes the way they can with books. There are too many distractions. It’s hurting their eyes. I don’t see any benefits.”

Ratoath College in Co Meath, where her children attend school, has an iPad-only policy for children in junior cycle.

However, Ms Kaya says she ended up buying books for her daughter, Leyla, for the Junior Cert.

Technology isn’t going away. Much of teaching and learning is now relying on it

“I gave her the choice. She found she was able to study better with physical books. She was able to concentrate better and take notes. It’s more tangible and there are fewer distractions . . . I’m not against technology, but I just don’t think it should be the primary learning tool.”

Ms Kay’s concerns about the reliance on technology are shared by dozens of other parents at Ratoath College.

About 50 parents gathered at a meeting on Thursday night to voice their opposition to the move.

Many have pledged to refuse to buy devices for their children, while there are plans to set up a petition to call for the reintroduction of books.

There are also concerns over the cost of iPads – typically €500 or more – and licence restrictions which mean they can’t be reused by other children.

Most of the parents agree there is a place for computers or devices in learning.

However, they say they are opposed to the replacement of books on the basis that children are already spending too much time on smartphone screens.

In a statement, the principal of Ratoath College, Oonagh Prendergast, said the school is seeking to meet the needs of students emerging into the "rapidly changing world of the 21st century".

She said the school's  "progressive vision" has been commended in many recent school inspections.

Ms Prendergast said there was a need to move beyond just the content knowledge in books, and that skills such as critical thinking and problem-solving could not be taught from textbooks.

She said a recent consultation showed there was a "significant minoroity" of parents who were concerned about the changes and the school's board of management has committed to review its digital learning policy between now and December.

Parents’ concerns come at a time when millions of euro is being invested to boost the capacity of schools to embed technology into the classroom as part of the Government’s ambitious digital strategy.

It is aiming to make the Irish education system the “best in Europe” at using technology in schools by 2026.

As for whether students should rely on iPads or devices rather than books, a spokesman for the Department of Education said this was a decision for the boards of management of individual schools.

“Where the introduction of new technology is planned, consultation with members of the school community including parents is advised,” the spokesman said.

While there are no official figures on how many schools are using devices, Wriggle – one of the largest firms supplying iPads to schools – manages up to 40,000 devices for students in more than 100 secondary schools.

It says schools use a combination of tablets only, or tablets alongside printed textbooks.

“In our experience, many of our schools opt to provide printed textbooks alongside tablets,” a spokesman said.

“We would never say technology should replace pen and paper. There are circumstances where printed textbooks are appropriate. We take our direction from the schools as to their preferred blend of learning across all of their classes and offer solutions that best suit their needs.”

Clive Byrne of the National Association of Principals and Deputy Principals also says most secondary schools are now using them in some shape or form.

“Technology isn’t going away,” says Byrne. “Much of teaching and learning is now relying on it. We’ d be holding back the tide if we were against it. What is crucial, however, is that teachers have proper in-service training.”

Another source with significant experience of technology and education agrees.

“Parents need to see there’s a plan to improve learning outcomes, not simply replace books with devices,” said the source, who declined to be named. “It should enhance, augment and redefine how children learn – and that needs to be communicated to parents.”

However, research is still in the early stages over the impact of technology on the quality of children’s learning using technology – and much of it shows mixed results.

A recent Europe-wide research project found that young “digital natives” are more likely to absorb information from printed books rather than screens for longer pieces of text.

The analysis – based on 54 studies of how more than 170,000 people are learning across Europe – found that young readers were more likely to skim longer pieces of text when using iPads or e-readers, especially when under time pressure.

It prompted the issuing of the “Stavenger Declaration”, signed by more than 100 scholars and scientists, which calls for caution when introducing digital technologies to education and urges further research on issues regarding screen technologies and cognition.

Ms Kaya, meanwhile, says her mind is made up: she does not want her son to rely on an iPad as his primary learning tool.

“They are shiny and new and, of course, kids will opt for them at the start. But I’ve realised that they are really just a gadget... I ended up buying books for my eldest and second child who are in secondary, and I’ll do the same for my son.”