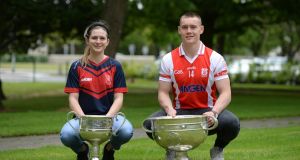 Martha Byrne and Con O’Callaghan of Cuala GAA club with the Sam Maguire and Brendan Martin cups. Both players have benefitted from the new GAA initiative. Photograph: Dara Mac Dónaill

Colleges fees paid for players, paid work experience and career mentoring: welcome to the new frontier of club sponsorship in the GAA.

Traditionally, a company’s involvement with their local club might have amounted to funding a set of tracksuits or some money.

But Dalkey-based Cuala in Dublin has entered into a new era of a “partnership” with the American biotech firm Amgen which involves education and employment opportunities.

Under the arrangement, the team’s football and camogie players will have a chance to gain an annual €5,000 education bursary for a player going to college, along with guaranteed places on paid eight-month internship programmes with Amgen and ongoing access to career advice and mentoring.

It forms part of a new three-year deal signed between the US firm and Cuala for an undisclosed sum,

“It’s unique and I believe it will be copied by clubs, especially in urban areas where there is a big local employer,” says Des Cahill, the RTÉ presenter and former chairman of the south Dublin GAA club. “Rather than just giving money, it is also giving education.”

For the club, it means it is able to offer the chance of professional opportunities to players in the local area in return for their club commitments.

And for Dún Laoghaire-based Amgen, there is the opportunity to spot high-achieving individuals who can flourish in their workplace.

Olive Casey, director of human resources at Amgen, says the initiative is mutually beneficial for the firm and club.

“And that’s exactly what we’re look for . . . Biotech is a complex world and we’re trying to do difficult things: you need to be resilient when trying to discover new products; it’s a cause you need to believe in . . .”

Cuala, which has close to 3,000 members, has lots of players at third level who can are under pressure to juggle study, work and club commitments.

The chance of working in the locality, then, makes a lot of sense, says Con O’Callaghan (23), a dual player with Cuala and All-Ireland winner with the Dublin senior football team.

“I think it’s a such a great idea and an opportunity for companies that want to be engaged with the club,” says O’Callaghan, who has just completed a commerce degree at UCD.

“It’s not just providing funding, but enhancing career and local employment options. We’re lucky to have a company like that on our doorstep.”

Cuala is, of course, luckier than most clubs. It is one of the most affluent regions in the country. It has a large catchment area and is well-connected.

But is also has its drawbacks: many young people can’t afford rents, or find themselves studying or working outside the area.

Martha Byrne, a club player who is also an All-Ireland winner with the county side, says the new move will help players stay locally.

“For players, there’s a sense that the sponsor is investing in players at the club . . . it gives a sense of it community and it’s great to know there are local opportunities,” says Byrne, who is completing a dietetics master’s at UCD.

GAA top brass are eyeing up the arrangement which they see as a template that could be used by other sponsors.

GAA president John Horan says it is a “truly magnificent announcement” which will help young men and women continue to play the sport they love, as well as give them a professional opportunity with one of the largest employers in south Dublin.

“The inclusion of the educational benefits is a wonderful model that hopefully can be copied in other sponsorship deals going forward.”