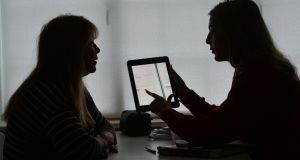 Angela Kaya and her daughter Leyla at their home in Ratoath, Co Meath. Photograph: Alan Betson / The Irish Times

Parents of pupils at a Co Meath secondary school which has replaced textbooks with iPads are refusing to buy devices for their children because they are spending too much time on screens.

Ratoath College, which does not use printed books for junior cycle students, has advised parents to buy iPads – at a cost of €500 or more – for their children ahead of the new school year.

However, dozens of parents attended a protest meeting on Thursday night where they said their children’s education had been harmed by over-reliance on digital technology since the policy was introduced in recent years.

Nicola Kearns, a mother of three and a former teacher, said the devices were a source of distraction for children and resulted in poorer learning outcomes.

“They don’t learn effectively on screens. And their level of maturity is such that if you leave them to do homework on an iPad, inevitably they’ll be on YouTube or social media, and why wouldn’t they? It’s not their fault. Professionals have allowed this to happen,” she said.

Ms Kearns, who is also a former Department of Education inspector, said the school policy meant parents ended up “policing” their children’s learning rather than supporting it.

In a statement, the principal of Ratoath College, Oonagh Prendergast, said the school's "progressive vision" had been commended in many recent school inspections.

She said there was a need to move beyond just the content knowledge in books and that skills such as critical thinking and problem-solving could not be taught from textbooks.

She said a recent consultation showed there was a "significant minoroity" of parents who were concerned about the changes and the school's board of management has committed to review its digital learning policy between now and December.

A Department spokesman said use of devices was a decision for individual school boards of management.

While there are no official figures on how many schools are using devices, Wriggle – one of the largest firms supplying iPads to schools – manages up to 40,000 devices for students in more than 100 secondary schools.

It says schools use a combination of tablets only, or tablets alongside printed textbooks.

A spokesman for Wriggle said it did not advise schools to replace pen and paper with technology.

“We take our direction from the schools as to their preferred blend of learning across all of their classes and offer solutions that best suit their needs,” he said.

Parents at last night’s meeting said they were not against technology, but feel iPads should not be their children’s primary mode of learning.

A recent Europe-wide research project found that young “digital natives” were more likely to absorb information from printed books rather than screens even though they had grown up surrounded by digital devices.