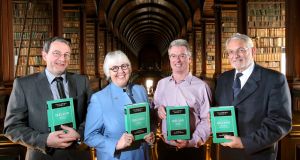 The editors of the four volumes of the Cambridge History of Ireland, professors James Kelly, Jane Ohlmeyer, Brendan Smith and Thomas Bartlett at the book’s launch in Trinity College Dublin. Photograph: Mark Stedman

President Michael D Higgins has expressed “deep and profound concern” that history will no longer be a core subject at Junior Certificate level.

Speaking at the launch of the four-volume series, Cambridge History of Ireland, on Monday evening in Trinity College Dublin, he said history is the “inheritance of all our people” and a republic worthy of the name would seek to make it accessible to as many people as possible.

He described the 3,200-page work as an “intellectual riposte to those who doubt the vital importance of the study of history in our universities and in our society”.

Under junior cycle reforms being introduced, history will no longer be a compulsory subject for students from next September onwards.

Instead, just three subjects will be mandatory – Irish, English and maths.

Schools will have the freedom to provide other subjects and so-called short courses, such as digital media literacy and computer coding.

President Higgins said a knowledge of history is “intrinsic to our shared citizenship, to be without such knowledge is to be permanently burdened with a lack of perspective, empathy and wisdom”.

The President added: “Moreover, to be without historical training, the careful and necessary capability to filter and critically interpret a variety of sources, is to leave citizens desperately ill-equipped to confront a world in which information is increasingly disseminated without historical perspective or even regard for the truth, and I refer now not only to social media but to the news industry more generally.”

The Cambridge History of Ireland is a four-volume series which features the work of 103 contributors from 39 countries and is 3,200 pages in total.

It is a measure of the confidence that the publisher, Cambridge University Press, has in the enterprise and the popularity of Irish history in general, that it is asking €400 for the four-volume set, and €120 for individual volumes. The publisher has done it without any public subvention.

Will the public be inclined to pay such a hefty price tag for the book? “I have been amazed at the number of people who are asking for sets as gifts. They see it as a flagship publication,” said co-editor Prof Jane Ohlmeyer, who edited the second volume in the series covering the years between 1550 and 1730.

She hopes there will be a ready-made audience for it in the form of public and university libraries at home and abroad which have deep pockets. It will also be published electronically at a more competitive price at a later date.

From conception to publication, the Cambridge History has taken four years, a very short time span for the work involved. It arose out of a symposium in the Trinity Long Room in 2014 on the decade of commemorations.

“We were determined to bring out all four volumes together. When we said that, I don’t think anybody at the time thought we could do it,” Prof Ohlmeyer said.