‘When I opened my bookshop, a lot of people told me I was foolish’

Dawn Behan of Woodbine Books in Kilcullen, Ireland’s Independent Bookshop of the Year, on the secret to her success 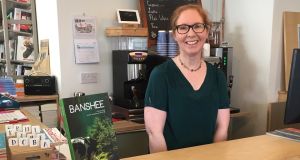 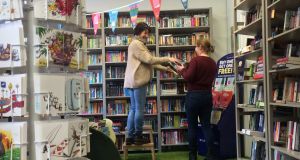 Woodbine Books in Kilcullen: The atmosphere in a bookshop is very important. This is created by a combination of elements, including layout of the shop, book displays, background music and staff interaction with customers and each other

When I opened an independent bookshop in Kilcullen, Co Kildare on September 28th, 2016, a lot of people told me that I was foolish. Some were blunt, coming into the bookshop to tell me in person that people didn’t buy books and that Kindles were the future. Some were more diplomatic, waiting until it was obvious that the bookshop was flourishing to tell me about their initial fears. My favourite was the man who came in and told me that he and his friend had made a €5 bet that the shop wouldn’t be open in six months. Thankfully, he had put his money on us being open and he told me that having seen the shop, he was going to raise the stakes to €10. He also bought a book so on balance, it was a welcome visit!

As I had no experience as a bookseller, the first thing I did was to attend an Introduction to Bookselling course run by the Booksellers Association of UK and Ireland. I found this course invaluable, as it addressed the practical day-to-day elements of running a bookshop but also preserved the romantic ideal of running a bookshop.

When I began to make concrete plans to open a bookshop, I knew my local town of Kilcullen was the ideal place. Kilcullen is a picturesque place located on the River Liffey, about 55km from Dublin. Although it is a small town with a population of about 3,500, it has grown considerably in the past 20 years, with a mix of long-established families and new residents. It is home to several award-winning businesses, including Nolan’s Butchers, Berney’s Saddlery, Jane Russell Sausages and Fallon’s Restaurant. It has a very active Community Action group, drama club, thriving GAA club, tennis club and community magazine. It is also home to a Camphill Community, with a cafe, organic food shop and weavery on site.

Most people are delighted when a bookshop opens in their locality and make a special effort to support it. They come to think of it as their bookshop, which of course it is because it gradually becomes moulded to their needs. In return for their support, you need to offer something special. People don’t expect a bookshop in a small town to stock every book currently in print, but they appreciate it if you offer an ordering service and contact them when their order is in stock. While it is important to stock bestsellers and books currently being discussed in the media, I also try to stock more unusual books, including books by local authors. Customers like to unearth a hidden gem and having an eclectic range makes customers more likely to spend time rummaging.

The atmosphere in a bookshop is very important. This is created by a combination of elements, including layout of the shop, book displays, background music and staff interaction with customers and each other. The most important thing is to create an inviting space. When I opened my bookshop, I used the radio as background music but discovered that this can be problematic, because the content can’t be controlled, so I created a Spotify playlist instead. This is something that seems trivial, but it is only when you have corrected the issue that you realise how much of an issue it was!

As you get to know your customers, you get a feel for their tastes and can give personal recommendations. In an independent bookshop, staff are familiar with every book on the shelves because they have ordered it, unpacked it, priced it and shelved it. This knowledge is invaluable when customers ask for help choosing a book, either for themselves or someone else. Customers may come back and tell you what they thought of a book and you can use this when making recommendations too. No matter how sophisticated an algorithm is, it cannot compete with this level of knowledge and service!

Of course, this assumes people know your bookshop exists and where it is situated. It is an impossible task to make everyone aware of your presence. We have customers who regularly visit from as far away as Nenagh and Enniscorthy, yet at least once a week someone local will come in and say, “How long are you open? I never knew you were here”. The main challenge is to create awareness among as wide a cross-section of people as possible. Social media is a useful tool but won’t reach everyone. People become fixated on the number of followers they have but if these numbers don’t translate into book sales then in practical terms they are worthless. It is often more rewarding to partner with local schools and clubs by providing sponsorship and prizes for their fundraising events. This creates awareness of your bookshop and also benefits the local community.

People will offer suggestions on ways to improve your business. It’s important to listen to these. By no means should you follow all (or any!) of these suggestions but sometimes they offer a perspective that you may not have considered. When planning my bookshop, I was adamant that I would never sell school books – I wanted my bookshop to sell “real” books. However, after a few months, some customers asked if we would consider selling school books. It turned out that for people living in Kilcullen, school book shopping involved several trips to one of the bigger towns in the area, paying for parking, queueing for the books and was generally very inconvenient. I felt guilty for not offering this service to people who went out of their way to support me, so I agreed to try it out. Customers dropped their school book lists into the bookshop, we prepared their order and contacted them when it was ready. I expected to get 20 or 30 orders but by the end of August we had fulfilled almost 500.

Selling school books is not very lucrative, but has the unexpected effect of attracting new customers who would otherwise never have been aware us. To be honest, when I thought about attracting customers, I only really considered people who bought and read books regularly. When we started selling school books, it opened my eyes. A lot of the new customers were people who weren’t in the habit of reading for pleasure but who have returned to buy greeting cards or books as gifts.

Running an independent bookshop is the most interesting, challenging and enjoyable thing I’ve ever done. Bookshop customers are generally lovely, you meet fascinating people and hear all kinds of stories. You feel like you are contributing to the social fabric of your town. And no matter how badly your day is going, you spend it surrounded by books!
Woodbine Books in Kilcullen is Ireland’s Independent Bookshop of the Year. The overall winner of the £5,000 prize, won last year by Dublin’s The Gutter Bookshop, will be announced at the British Book Awards ceremony in London on May 14th.