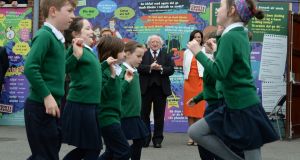 President Michael D Higgins looks on as pupils at Scoil Bhride perform a set dance during his visit to celebrate the 100th anniversary of the school’s foundation. Photograph: Cyril Byrne/The Irish Times 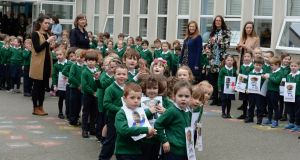 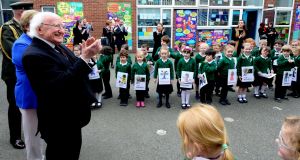 President Higgins placed a copy of a speech he delivered into a time capsule along with photographs and letters written by schoolchildren at the Gaelscoil.

The time capsule will be opened in 2067 when the oldest child currently in the school will be 62 years of age.

The school was founded by suffragist and nationalist Luíse Ghabhánach Ní Dhufaigh (also known as Louise Gavan Duffy) and Áine Nic Aodha with just a dozen students in 1917.

All subjects were taught through the medium of Irish.

Ní Dhufaigh, who was born and raised in Nice, first came to Ireland to attend the funeral of her father, Young Irelander Charles Gavan Duffy in 1903.

She returned some years later to study at UCD and met Patrick Pearse through Conradh na Gaeilge. She later taught at his school, Scoil Íde, in Teach Feadha Cuileann where she developed her own vision of education.

She was present in the GPO during Easter Week, 1916 and was a founding member of Cumann na mBan. She died in October 1969.

Originally housed in No. 70 St. Stephen’s Green, the school moved several times since its foundation and is currently located on Bóthar Feadha Cuileann in Ranelagh.