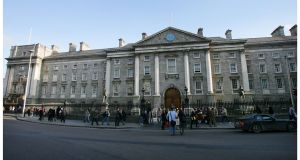 Research into student loan schemes, commissioned by the Technological Higher Education Association, has said such a system would not work. Photograph: Bryan O’Brien

The feasibility of a student loan scheme where funds would be repaid by graduates after they reach a certain income level has been dismissed in research commissioned by the State’s institutes of technology.

The Oireachtas Joint Committee on Education is examining new proposals to fund the higher education system, which is in crisis following years of funding cuts and rising student numbers.

An expert group, chaired by former trade union leader Peter Cassells, has proposed a number of new funding models, including an income-contingent loan (ICL) scheme for students, which involves graduates paying back loans once they reach a certain income.

However, research commissioned by the Technological Higher Education Association, the representative body for the 14 institutes of technology in the Republic, has said the system would not work.

Dr Charles Larkin, of Trinity College Dublin, who carried out the research with colleagues, said the proposal would cost the exchequer €10 billion over 12 years before repayments stabilised the system.

The association said Dr Larkin and Dr Shaen Corbet from DCU carried out a “detailed cost/benefit analysis” of the proposed scheme.

They concluded that “the Irish system is neither small enough nor large enough to make an ICL system work”.

“The cost/benefit analysis – even excluding set-up costs, legal enforcement, and judicial review – still does not support the implementation of the ICL model,” they added.