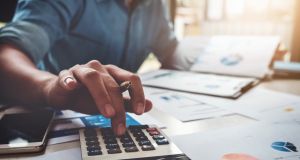 Accounting exam was “conservative” in the topics examined, said some teachers. Photograph: iStock

Eamonn Scully, ASTI subject representative and a teacher at Maria Immaculate Community School, said that practice is particularly important for this subject and those who had put in the work would have done well.

“In line with one of its basic principles, the higher level paper could be described as being conservative in both topics examined and content,” said Ray O’Loughlin, an accounting teacher at the Institute of Education.

Mr Scully liked one particular question which had a nicely topical twist. “Students were asked to analyse the performance of a company involved in renewable energy.

“They were also asked for their advice on acquiring another company and, while this was different from previous questions, it wasn’t particularly hard.”

Mr O’Loughlin said that there was a nice range of short questions which provided great choice for students.

“Question one saw a welcome return of an uncomplicated question on company final accounts after a three-year absence.

“Club accounts, which last appeared in 2011, had a few added problems such as accumulated depreciation, a missing loan figure and a national lottery grant appearing as a revenue item. It was very manageable, however.

The ordinary level paper featured “old reliables” such as cash-flow statements and was, as always, fair and approachable, Mr Scully said.