Only six graduates in training to be physics teachers 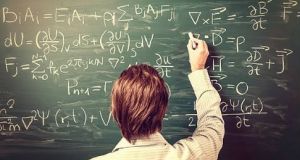 Physics in action: The shortage of qualified teachers threatens to undermine Government plans to make Ireland the best in Europe in so-called Stem subjects – science, technology, engineering and maths – within a decade. File photograph: Getty Images

As few as six graduates are in training to be physics teachers in secondary schools, new figures indicate.

The shortage of qualified teachers threatens to undermine Government plans to make Ireland the best in Europe in so-called Stem subjects – science, technology, engineering and maths – within a decade.

The number of trainee teachers is also low in other key Stem subjects such as computer studies/ICT (six), applied maths (four) and technology (16).

While more trainee maths teachers are completing postgraduate teaching courses (96), this is still far less than English (471), geography (395) and history (360).

Education experts believe the shortage of Stem teachers is linked to graduates opting for better-paid jobs elsewhere, along with young teachers taking career breaks to work in the Middle East.

Many of the State’s 700-plus secondary schools are currently unable to recruit qualified teachers in key Stem subjects.

School managers say the quality of education is at risk because of a growing reliance on unqualified staff.

Minister for Education Richard Bruton acknowledged yesterday that schools have reported shortages of teachers in subjects such as physics and said the reasons were “complex”.

He said the new Stem strategy committed to collecting data on the availability of Stem teachers and prioritising measures to increase the supply if required.

Mr Bruton insisted there was no crisis and pointed to “fastastic” international data showing that Irish students are performing highly in maths and science at primary and second level.

The draft figures on trainee teachers – discussed at a meeting of education authorities in the past fortnight – are based on the number of entrants to professional master of education courses in 2016 and 2017.

They do not include entrants to Trinity College Dublin, Hibernia College or undergraduate courses.

Employer’s group Ibec said the supply of high-quality Stem teachers was a critical issue for Ireland given our reliance jobs in this sector.

Scientists, technologists, engineers and mathematicians are the high-end knowledge workers who turn the wheel of the Irish economy

“We have the EU’s highest proportion of workers in high-tech manufacturing, with twice the level of Germany in second place,” Tony Donohoe of Ibec said.

“Therefore scientists, technologists, engineers and mathematicians are the high-end knowledge workers who turn the wheel of the Irish economy.”

DCU president Brian MacCraith said specialist teachers were particularly important in secondary schools, where a “teacher’s deeper understanding of, and confidence in, the subject can be instrumental in stimulating interest and engagement among students.”