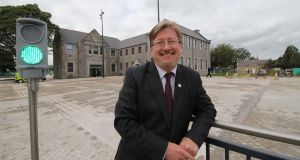 A second group of senior academics in the Dublin Institute of Technology (DIT) has criticised the lack of engagement around a proposed merger with two other institutes of technology.

In a letter to the chair of the college’s governing board, 32 senior academics, all assistant heads of school or heads of department, said they had “significant concerns” over the lack of dialogue.

In all, up to 50 senior academics have now expressed concerns to the management of DIT over the project.

The latest group to express concern said that since September the assistant heads of school had not been invited to any of the TU4D meetings examining the proposed merger.

“We are concerned and aggrieved that, despite our substantial experience and expertise, we have been largely omitted from the TU4D process,” their letter stated.

The assistant heads of school and department heads are the professional rung below the overall “head of school”. The letter to Prof Tom Collins, chair of the college’s governing board, said previous inputs on the merger had not been taken into account.

Earlier this autumn 18 heads of school wrote to Prof Collins and the DIT president Prof Brian Norton over similar concerns, claiming they were being “excluded” from the merger process. They said the sidelining of senior DIT academics will “disable from the outset the ability of the institution to function as a university”.

The assistant heads of school also argued for a greater role on the various TU4D working groups and committees.

The group said the success of the project would “depend heavily” on their input and co-operation. “We are concerned with the reality of the emerging structures due to the current lack of inclusiveness,” they said.

Their letter stated that DIT academics were not being proportionately represented in the make-up of committees managing the proposed transition.

The letter also expressed concern over the recruitment of governance positions in the new institute. Staff had concerns their current lack of involvement in the process would “negatively affect” their competition with colleagues from the other institutes of technology for positions on boards.

A recent amendment to the Government’s criteria for the approval of technological university status this July added a greater requirement to show the benefits of mergers to the wider geographic region.

In October, DIT advertised for a consultant to draw up a socioeconomic report on the value of the proposed technological university for the wider Dublin region and nationally. The cost of the report is estimated to be around €60,000.


* This article has been amended to correct an error