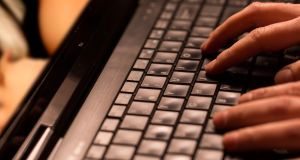 One in five secondary school children do not have reliable broadband and face major challenges with remote learning, a new survey indicates. Photograph: iStock

One in five secondary school children do not have reliable broadband and face major challenges with remote learning, a new survey indicates.

The poll of more than 3,600 parents was carried out by the National Parents Council post-primary earlier this month.

While the vast majority of students are in contact with teachers and receiving assignments, the findings indicate at least 15 per cent of young people are not receiving any feedback.

The vast majority of students are using a combination of text books and digital tools to learn and complete assignments.

School email is the most popular mechanism of communication, with text messaging services and WhatsApp also commonly used.

However, up to 20 per cent of parents surveyed say do not have reliable broadband available in their household.

In addition, some 30 per cent say they experience issues with connectivity such as poor speeds and intermittent service.

“Broadband at the moment is very slow and breaks down quite frequently as we live in a rural area and infrastructure in the area is not capable of providing a full service as everyone is on internet,” said one parent who was surveyed.

Another commented: “Sometimes the broadband strength is too weak so my son walks up the road where he can get a 4G signal and sends the work on his phone.”

Primary and secondary schools across the country closed last month as part of the Government’s effort to curb the spread of coronavirus, also known as Covid-19.

Most parents (79 per cent) said no difficulties had arisen in communication with schools. Where there were difficulties, most reported that these issues had since been addressed.

Parents also indicated that most students have unlimited access to their devices (80 per cent).

Of those with limited access, most still used their devices for more than five hours per day.

In unprompted comments, many parents said they felt students with additional needs such as dyslexia were suffering from a lack of structure, routine and support.

Some also felt the volume of work being sent to their children was overwhelming, with children spending up to five or six hours on homework.

However, others were very complimentary and said schools and teachers had provided “incredible” supports.

In its recommendations, the council calls for efforts to be placed into ensuring that all students have the means necessary to work efficiently at home, including appropriate devices and broadband coverage.

It also highlights the need for individualised supports for students with special or additional needs to ensure that they are not disproportionately affected by school closures.

“The ongoing school closures have resulted in a large-scale unplanned migration to distance learning,” he said.

“While it is welcome that this survey indicates that the vast majority of students are in contact with teachers, and that our education system is responding to this new way of working, it also indicates a number of areas in which we need to urgently improve.”