The first anniversary of the cathedral blaze highlights parallels between catastrophes 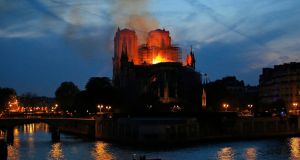 In human terms, the fire that destroyed much of Notre-Dame cathedral on April 15th, 2019, cannot be compared with the Covid-19 pandemic. No one died in the fire that ravaged the 800-year-old cathedral. Coronavirus has already claimed nearly 16,000 French lives.

And yet, as France marked on Wednesday the first anniversary of its previous catastrophe, nearly everyone seemed to see it as a parable for the pandemic.

Work on the cathedral halted abruptly when France went into lockdown on March 16th. President Emmanuel Macron nonetheless renewed his pledge to rebuild the monument by 2024, in a speech posted on social media. “We shall do everything to meet that deadline,” he said, promising that reconstruction work will resume as soon as possible.

“The present times demand strength of the soul,” Macron said. “If all of us care about the restoration of Notre-Dame, it is because she is the symbol of the resilience of our people, of their capacity to surmount trials.”

The Catholic daily La Croix noted that the destruction of the cathedral’s wooden roof left the sanctuary open to the elements. Likewise, the pandemic left humankind exposed. “Man is uncovered, without a roof,” the paper said.

Le Figaro’s editorial drew a parallel between the cathedral’s slow recovery and the situation post-pandemic. “Like the edifice to be rebuilt, the reorganisation of society . . . will be long, complex and filled with unforeseen events. It will demand ingenuity, patience and humility.”

Msgr Michel Aupetit, the archbishop of Paris, entered the cathedral to pray for the victims of Covid-19 on Good Friday. The violinist and the actor who accompanied him wore hazmat suits to protect them from lead contamination from the melted roof.

The gros bourdon, the cathedral’s 17th-century bell, was to ring at 8pm on Wednesday “in unison with the French who applaud healthcare workers at their windows”, culture minister Franck Riester said. “It will ring to show our resilience, our solidarity and our collective capacity to overcome adversity.”

Investigating magistrates have found no evidence of criminal intent, yet the fire prompted conspiracy theories about Islamic fundamentalists. Now French social media is rife with conspiracy theories portraying the pandemic as the result of germ warfare.

Philippe Villeneuve, the architect in charge of reconstructing Notre-Dame, is teleworking during the lockdown, studying the 3D model of the cathedral on his computer. About 100 electronic sensors have been placed throughout the structure to report any sign of instability.

More than 300,000 people from around the world donated sums totalling hundreds of millions of euro to restore Notre-Dame. French authorities are now paying hundreds of billions to salvage the economy.

France spent €165 million just to secure the fragile shell of the cathedral in the year following the fire. The most immediate concern was that flying buttresses would collapse and bring down the structure like a house of cards. It took three months to shore up the buttresses with 32 wooden arches weighing eight tonnes each.

Two huge tasks remain before actual renovation begins some time next year: dismantling the scaffolding that was already in place when the fire occurred, and clearing remaining rubble from above what is left of the vaulted ceiling.

Villeneuve says 40,000 tubes of now melted, twisted metal scaffolding saved the cathedral by holding it together at the time of the fire, but they also represent a threat, because the scaffolding is unstable. A ring of steel beams was clamped around it, to prevent it moving. Workers were about to begin dismantling the scaffolding when the lockdown started.

Abseilers protected from lead poisoning by hazmat suits and goggles are called “squirrels” on the site. They have cleared charred wood and other rubble from above the vaulted ceilings of the north and south transepts, but hundreds of square metres remain to be cleared above the nave.

One year ago, thousands of people watched in horror as the cathedral burned. Some wept. Some prayed. They let out a collective gasp an hour and a half after the fire started, when the spire crashed like a giant torch into the sanctuary below.

Macron created controversy by suggesting that the new spire might make “a contemporary architectural gesture”. Those involved in the project, as well as public opinion, seem to prefer an exact replica of Viollet-Leduc’s 19th-century spire.