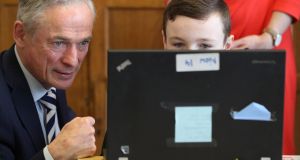 Minister for Education Richard Bruton in March when he published new targets for numeracy and literacy in schools. Photograph: Maxwells

Primary-school teachers and unions have said Minister for Education Richard Bruton’s “ambitious” plans to introduce coding to all primary schools by September 2019 are not realistic.

Teachers have said schools do not have the broadband or IT resources to start teaching coding in just two years’ time.

Last week Mr Bruton announced a new Digital Strategy plan for primary and secondary education. The plan aims to introduce computer coding into the maths curriculum at primary level by September 2019, along with a pilot computer science Leaving Cert programme in about 30 schools in 2018.

“We don’t have the capital resources to do this right. There seems to be a disconnect between the ambition and the plan, and what the teachers are dealing with on the ground.”

Ms Brennan said the move towards technology in the classroom was welcomed by teachers, but infrastructure such as broadband and computer equipment in most schools is not currently adequate.

“Unless we see real funding being provided I’m not sure this will work” she said.

John Boyle, president of the INTO teachers’ union said the digital plan “is long on ambition but critically short of resources”. He said “at present a handful of primary schools have high-speed broadband. This has been promised to primary schools for years and yet there is no plan in place to roll out this connectivity to more than 3,000 primary schools”.

Damien Burke, a maths lecturer in the Marino Institute of Education in Dublin, said learning coding was “very beneficial for children, particularly in building problem-solving skills”.

“Children in primary schools now nearly all have smartphones, so they are favourably disposed to learning coding more than ever before.

“It’s the system that may need time. There’s a major broadband issue, and not just for rural schools, you would be surprised at the lack of quality broadband for many schools in Dublin,” he said.

The upskilling of teachers across the country to prepare them to properly teach programming would also be a major obstacle to rolling out coding by September 2019, Mr Burke said.

The Department of Education is providing €180 million over the next four years to primary and secondary schools in extra grants for IT equipment.

A spokesman for Mr Bruton said, “over the past two years, the department has further upgraded more than 1,000 primary-school connections to high-speed broadband, in areas where the infrastructure can facilitate this”.

The Department of Education plan to have the updated maths curriculum, which includes coding, ready by September 2018, “followed by an extensive period of teacher professional development before its introduction to schools, which is currently scheduled for September 2019” the spokesman said.