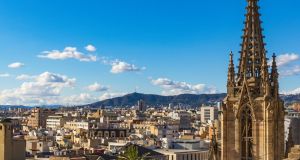 Mark Walshe, a teacher in St Finian’s Community College, Swords, said the paper would have been “fair to students who worked consistently over the three years”.

Students in Rosemont School in Sandyford described the paper as “not too challenging but not super-easy”.

Subjects covered were topical, with questions on the language website Duolingo as well as travel and tourism.

Julia O’Malley, a teacher in Rosemont, said the aural exam was fair, with plenty of texts to engage student interest.

The timing of the exam worked well, with students given “ample time” to answer all questions.

She said it was was a “broad paper” which offered students many opportunities to use the vocabulary they had learned.

However, Mr Walshe noted that there would have been “the odd word” that most students would not have recognised.

While culture was a broad theme on the paper, knowledge of current events would have helped students contextualise the questions, teachers said.

The reading comprehension and written expression sections offered no big surprises and followed a similar format to previous years.

There was some advantage for students who had prepared for the optional oral exam, as Ms O’Malley said they “would have been able to draw on that material for the phrases task”.

The letter-writing part of the exam would have offered students plenty of choice, she said.

Ordinary level students also had no big surprises with a balanced selection of questions.

The majority of students sitting the Junior Cert exam took the higher level paper, an estimated 8,128 of 10,428 students.