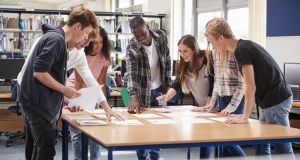 The data reveals Ireland’s exceptionally high third-level participation rate, which is among the highest in the world. File photograph: iStock

The Irish Times 2019 Feeder School list, published today, provides new insights into the education pathways taken by thousands of Leaving Cert students who left secondary school this year.Here are some of the key points from this year’s data:

1. Most students are staying local

Irish young people are tending to apply for third-level places in their local colleges. Most Irish school-leavers want to attend colleges where they can continue to socialise with their peer group.

But there is a growing economic factor too: living away from home adds hugely to the cost of attending college.

There remain stark differences in college participation based on social class.

The most affluent parts of the capital such as Dublin 2, Dublin 6 and Dublin 4 saw 90-100 per cent of pupils progress to college.

By contrast, in more deprived areas of the city such as Dublin 17, the proportion of Leaving Cert students going to college was just 15 per cent.

The divide is also stark when the figures are broken down into higher points courses (defined, in this case, as programmes in universities, colleges of education, the Royal College of Surgeons in Ireland (RCSI) or the Technological University Dublin).

Some 88 per cent of school-leavers in Dublin 6 went on to one of these institutions, compared with 15 per cent in Dublin 17.

The data reveals Ireland’s exceptionally high third-level participation rate, which is among the highest in the world.

Ireland also continues to have one of the highest retention rates in second level across Europe: that is the proportion of students who stay in school until the Leaving Cert.

It is difficult to say how many students are progressing to further education or apprenticeships; we have consistently requested this data, but education authorities have not yet released it.

4. Are grind schools drawing students away from prestigious

While pupil numbers at second level are growing overall, our figures show that numbers sitting the Leaving Cert in more than one-third of fee-paying schools dropped this year.

Why? Two reasons come to mind.

Firstly, the country was still in the teeth of the recession when this year’s cohort of Leaving Cert students started secondary school in 2013. The downturn hit family income and enrolment numbers for private schools at the time.

Secondly, the presence of full-time grind schools in our major cities offering a two-year Leaving Cert programme seems to be drawing better-off families to these institutions for fifth and sixth year.

Overall, our figures show about 57 per cent of pupils in these 191 schools go on to higher education. These rates have not shifted much since 2013.

However, when we break down the figures to see which are the most improved individual schools over recent years, a great deal of them are in the Deis category. For example, Adamstown Vocational Colleges in Enniscorthy, Co Wexford, a Deis school, has seen its third-level progression rates jump almost 50 per cent in the past six years.

One in 10 schools saw more of their students start a college course in 2019 than sat the Leaving Cert in that school in June this year. How is this possible?

Students who defer taking up a course for a year are categorised as having sat the Leaving Cert in the year they took up their third-level course.

In addition, many pupils who go to grind schools are often still categorised as belonging to their original school.