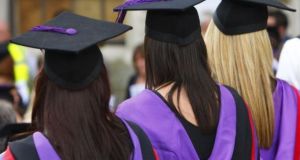 Pupils emerging from private schools are keeping a strong grip on the most sought-after third-level courses, despite millions being spent on narrowing the class gap in education.

The annual Irish Times Feeder Schools list – which measures the proportion of pupils who progress to third level – shows a gaping social divide between affluent and poorer areas.

Half of the 25 schools which sent the highest proportion of their students to third level this year were fee-paying schools.

Almost all pupils in these schools went on to higher education, and the bulk were in affluent areas of south Dublin.

By contrast, the proportion of students going to higher education in some of the poorest schools is as low as 15 per cent.

The dominance of the private school sector is likely to spark a fresh debate over State subsidies for the sector, which are worth €90 million a year.

This funding goes on salaries for teachers in the 51 fee-paying schools, along with capital expenditure, grants for computer equipment and sports facilities.

State support for disadvantaged secondary schools – known as the Deis scheme – is worth about €60 million a year.

This targeted funding goes towards additional teachers, grants for school books, school meals and other supports, over and above regular funding.

On average, fee-paying schools send 100 per cent of students to higher education, while this rate falls to 57 per cent among Deis schools. This gap has not narrowed over the past six years, data shows.

The social divide is more stark when third-level participation rates are broken down by schools sending the most pupils to high points courses. These are courses offered in the universities and other colleges.

Some 18 of the 25 schools which sent the highest proportion of their pupils to high points courses were fee-paying schools.

When overall third-level progression rates are broken down by school types, it shows there are significant differences.

They are followed by comprehensive schools (79 per cent), community schools (72 per cent) and Education and Training Board – formerly vocational – schools (69 per cent).

There has been no significant shift in these patterns over the past six years, data shows.

In a sign that the rising cost of college accommodation may be a factor for students, this year’s data shows lower third-level progression rates in counties which do not have a large third-level institution on their doorstep.

For example, third-level progression rates in Cavan (69 per cent) and Longford (66 per cent) lag well behind Galway (82 per cent), home to NUI Galway and GMIT.

When this year’s feeder school figures are broken down to show schools which have recorded the biggest increase in third-level participation in recent years, some disadvantaged schools come out on top.

For example, Adamstown Vocational College in Enniscorthy, Co Wexford, a Deis school, has seen its third-level progression rates jump by almost 50 per cent in the past six years.

Education analysts say that while data in the feeder school lists shows the proportion of students who go to third-level, it is not a reflection of whether one school is better than another.

Factors such as social class and geography play a significant role, given that more affluent students can afford additional support such as grinds.

The data also does not show the proportion of students progressing to further education or apprenticeships.

The Irish Times has requested this data, but education authorities have not yet released it.