No need to be left behind: Supports are shedding the stigma of being left-handed 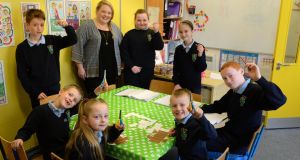 The word “left” has long been associated with wrongness or deviance –as leftness derives from the Latin word “sinister”, meaning on the left-hand side.

The fear of leftness has its roots in the Bible as Jesus reckoned that on Judgment Day the blessed would sit to the right of God; the damned to the left.

Until relatively recently, left-handedness was seen as an illness that needed curing.

In his 1937 handbook The Backward Child, the British child psychologist Sir Cyril Burt depicted left-handers as fumblers and bunglers who “squint” and “stammer” and “flounder about like seals out of water”.

A decade later, Abram Blau, head of child psychiatry at New York’s Mount Sinai Hospital, condemned left-handedness as “an expression of infantile negativism” linked to rebellious stubbornness, secretive superstition, obsessive cleanliness and other unpleasant traits. It was all due, it was believed, to an unloving “refrigerator mother”.

Even as late as the 1990s, some schools in Ireland were still forcing southpawed children to write with their right hands.

Nowadays, we know that nine out of 10 people are right-handed and that left-handedness is likely to be genetic.

We’ve also seen that interfering with handedness can be psychologically damaging and harm children’s self-esteem. Many middle-aged or older people still reel from being labelled “ciotógs” or being forced to write with their right hand.

Even though negative connotations have vanished, many left-handed children struggle with writing, scissors and other important skills.

As soon as your child develops their motor skills, they will show their dominant hand. So, what should you do if they are left-handed?

First of all, says Mairead Dempsey, occupational therapy manager at Enable Ireland, don’t force a round peg into a square hole. If you suspect your child’s a lefty, don’t attempt to transform him into a righty.

“Just ensure they use the hand they have a preference for. You should never try to change their dominant side,” says Dempsey.

“Handedness is predetermined genetically but can be changed by environmental factors.

“To begin with, babies and children use both hands interchangeably but as the neural system matures one side specialises and becomes the dominant or skilled hand and the other functions as an assisting hand,” says Dempsey.

On a practical level, Dempsey says there are steps pre-schools and primary schools to ease the transition.

“Preschools can help all children with hand-skill development – right and left handers – by not teaching children to write before they are developmentally ready.

“Preschool children should still be consolidating their fine motor skills through play – using both hands as they wish and not being forced to choose a dominant hand,” she says.

As an occupational therapist, Dempsey is of the opinion that some children seen for therapy have the handwriting difficulties because they have been introduced to writing too soon.

“I believe in Ireland and England we are expecting children to write too early – in other European countries and in North America children do not begin formal writing until six or seven years of age.

“This gives them plenty of time to consolidate their skills and have a definite dominance,” she says.

At school there are a range of ways teachers can help to support left-handed pupils.

“In the infants classes, cutting and writing skills would be assessed informally in the classroom by the class teacher, so ensuring every child has the necessary support is paramount to a child’s development and self-esteem.

There are a range of practical steps teachers can take to help support left-handed children.

They include seating plans that ensure left-handed children don’t bang elbows with the child sitting beside them.

Support with zips and buttons on coats is often needed, while tying shoe

laces can take left-handers a little longer to grasp.

“It is not unusual for left-handed children to develop a different grip on their pencil,” says Rushe.

“They push when writing, which usually leads to them having a tight pencil grip. This can lead to hand aching sooner than it should for an appropriate written task.

“Also their writing, due to a tight grip, can be difficult to develop a smooth handwriting flow. Another challenge is that their writing is hidden from view as they write.”

Some left-handed children can develop a “hooked” wrist posture when writing, so some teachers and therapists use a slant board on which to write.

Knitting and playing a musical instrument can also be challenging, but there are practical ways to make it easier.

“ These can be tricky but once you teach the child what to do standing opposite them, giving them a mirror image to practice on. It can help.”

The days, she says, when children were punished or chided for being left-handed are, thankfully, a thing of the past.

“My father is left-handed. When he was in school he had his hand tied behind and made write with his right hand.”

Dempsey says we now know that forcing a child to use their right hand can be damaging and may interfere with a child’s cerebral organisation.

“Being left- or right-handed is predetermined and parents and teachers should not try to change this.

“In very rare cases where a child has suffered a brain injury and can no longer use his/her dominant hand this is necessary and will be done with the guidance of the rehab team working with the child.”

In general, she says, there are no major differences in teaching left- or right-handed children.

Children who are left-handed will only need to see an occupational therapist if they have handwriting difficulties .

1. About 90 per cent of people are right-handed. Most of the rest are distinctly left-handed, though some are ambidextrous to one degree or another.

2. Left-handedness runs in families. In the British royal family, for example, Queen Elizabeth, Prince Charles and Prince William are all left-handed.

5. In medieval times, right-handed warriors had a distinct advantage in swordfights. They held their shield with their left hand – over their heart – and thus often lived to fight another day.

6. Ned Flanders, the Simpsons’ religious next-door neighbour, is so passionate about about being left-handed that he quits his job in the pharmaceutical industry and pours his savings into “The Leftorium”, a store that specialises in products for lefties. Many other characters such as Bart, Marge, Mr Burns are also lefties. Why? Simpsons creator Matt Groening is also a leftie.

10%: Estimated proportion of global population who identify as being left-handed

8%: Estimated number of left-handed children when both parents are right-handed