Hidden condition may be real reason many struggle with maths 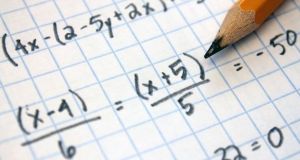 Northern Irish researchers have found many children are suffering from dyscalculia. Photograph: iStock

Researchers in Northern Ireland have found that many children are suffering from an undiagnosed developmental condition which affects their ability to learn maths.

A team of academics at Queen’s University Belfast who examined the performance of more than 2,400 primary schoolchildren found that some 112 children had a specific learning disorder in maths.

However, just one of these children was diagnosed with a specific maths-learning disorder, also known as dyscalculia.

The prevalence of the condition is thought to be similar to dyslexia, though there is far less awareness of it.

In fact, the team estimates that a child with dyslexia is more than 100 times as likely to receive an official diagnosis and educational support than one with dyscalculia.

For example, researchers found that 108 children in the group of just over 2,400 schoolchildren had a diagnosis of dyslexia.

Dr Kinga Morsanyi, who led a team of experts from Queen’s University Belfast’s school of psychology, said the study shows that in almost all cases, children who appear to have dyscalculia are not being diagnosed.

“In society, there is sadly a widespread notion that you need a special talent to be good at maths, and that struggling with maths is normal for some people, but this is not the case and it’s not something we would accept if a pupil was unable to read,” said Dr Morsanyi.

Within the sample of children with dyscalculia, researchers found that 80 per cent of the children had other developmental conditions, such as dyslexia or speech and language difficulties.

“As the current practice is to assign one diagnostic label to each child, this could partially explain why mathematics difficulties are so often ignored.”

Based on the team’s results, Dr Morsanyi said it seemed likely that children with persistent, serious difficulties with maths do not receive specialist support.

“Even if a child is diagnosed with dyscalculia, there is no standard process in place to support them,” Dr Morsanyi said.

The study also found there were no gender differences, either in the prevalence of dyscalculia or of exceptionally high performance in maths.

The research showed that girls, on average, tended to have higher IQs and English performance than boys, so a similar performance in maths could actually be interpreted as a relative under-performance in the case of girls.

This raises the possibility that girls with maths difficulties are particularly likely to not receive sufficient educational support.

“It is important to raise awareness of dyscalculia, as numeracy difficulties often lead to problems in later life, including greatly reduced employment opportunities, increased health risks and an increased risk of involvement with the criminal justice system,” Dr Morsanyi said.

“For example, 65 per cent of prisoners have number work difficulties, whereas the figure for literacy difficulties in the prison population is lower, at 48 per cent.”

The study was funded by the Nuffield Foundation, an independent charitable trust that funds research and student programmes to advance social well-being in the United Kingdom.