Six students at Limerick school score 10 As in Junior Cert 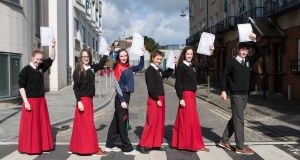 There were jubilant scenes at a school in Limerick, where six Junior Certificate students achieved 10 As, across all higher level subjects.

Principal Donnacha Ó Treasaigh, said he was “thrilled” for all 103 Junior Cert students attending Gaelcholáiste Luimnigh who received their results on Wednesday.

“We have an excellent cohort of pupils and we are thrilled with all of them. They all worked extremely hard,” he added. “We are a school that uses one-to-one devices, and we believe technology has a very important role to play in how young people learn in this day and age.”

More than 62,000 Junior Cert students across the country received their results on Wednesday, with almost 50 pupils securing top marks across all subjects.

A further 24 students attending the school achieved As and Bs in all higher level subjects.

“It feels great to see the work you put in come good,” said Íde Ní Ifearnáin, from Lisnagry, who got 10 As. “I didn’t expect to do that well in English so I’m really happy.”

Joe Tanner, from Annacotty, who has aspirations to be an engineer, was cool and calm as he reflected on his results. “It wasn’t too bad, and it worked out in the end anyway,” he said.

His mother, Mary Tanner, said she was “extremely proud” of him. “He worked hard and steady since last September, so he deserved his results.”

Eve McMahon, from Ardnacrusha, Co Clare, couldn’t hide her emotions. “It hasn’t really sunk in yet, to be honest. It’s unbelievable,” she said.

She didn’t expect as many high marks as she got. “Absolutely not expecting all these As. I was hoping for a couple of As in the subjects that I liked, but not this.”

After securing top marks across the board, Seoda Ní Chaoimh said she was looking forward to a rest. “It was hard when my brother and sister were watching movies and I had to do my homework, but I can watch all those movies now.”