No classes, homework or teachers: Learning curve at Wicklow school 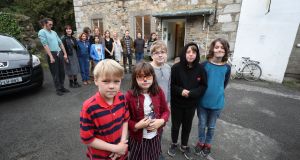 For the students attending Ireland’s first “democratic school”, there is no classroom, curriculum or timetable. In fact, there are no teachers either.

Wicklow Sudbury School, with an enrolment of 20 students ranging in age from seven to 18 is a school with a difference.

Students and staff have an equal say in how it is run. They are free to explore their own learning pursuits and interests – be it art, woodwork, film-making or computers – in their own time, style and at their own pace.

Instead of teachers, there are five “facilitators” with a range of experience who offer support for areas of learning and the smooth running of the school.

Bernard Moran, one of the facilitators, says he sees many students who struggled in a regular school blossom when given a chance to pursue their passions.

“Mainstream schools are great for about a third of students; and they’re okay for another third, but for another third it can be a disaster,” he says. “We’re providing some diversity to what’s on offer for students. We have self-directed learning. Students have autonomy and motivate themselves but there’s structure there too, so they’re not on their own.”

Word is spreading fast. When teachers, parents and students get a chance to see the school in action they become excited, he says.

Wicklow Sudbury School has 50 students on its waiting list. The school would happily accommodate all of them but has no room. That’s because three years after being established its survival is at stake for want of a suitable home.

It had recently to move from a rambling house and garden in the village of Kilpedderand now operates from a community centre three days a week, along with a yoga studio. Various family homes provide a venue on other days.

Two school buildings in the town that it considers suitable are lying idle: the old premises for Coláiste Ráithín and Ravenswell primary school, both of which relocated recently.

Moran says he understands the owners of the properties would be happy to rent out their premises but cannot do so without Department of Education approval. But a spokesman for the department said the premises are “not in its ownership . . . The facility in question is not a recognised school by the department and the provision of accommodation does not come within the department’s remit.”

For Moran, lack of interest in the matter by the department is disappointing. He says reviews of the mainstream curriculum show a huge appetite for change – a louder student voice, more creativity and less focus on high-stakes exams. “Here there is an opportunity to see all that in action. This is a different way of educating . . . but the department doesn’t seem concerned. We’ve just exchanged emails. We’d love a chance to have a proper conversation.”

While the school is not recognised formally by the department, it is registered and inspected by child and family agency Tuslawhose primary focus is child welfare.

A regular question Moran fields is whether Wicklow Sudbury School pupils can go on to do the Leaving Cert? He replies that it is an option, that the school uses tutors for subjects such as maths. But students can also get into college via the further education route which, strictly speaking, does not require points or grades.

This kind of education doesn’t come cheap, though. The non-profit organisation is not in receipt of State funding so charges tuition fees starting at €2,400 and rising depending on gross household income.

Families unable to afford this are, says Moran, accommodated.

The income is barely enough to pay running costs and facilitators are not earning much above the minimum wage, he adds.

“We’re all very passionate about this and end up working lots of hours that aren’t accounted for,” he says. “All we’re looking for now is some assistance with finding a suitable premises . . . Mainstream schools aren’t for everyone and we would love to be able to meet the needs of more students.”