Despite access initiatives, a large divide remains between rich and poor at third level 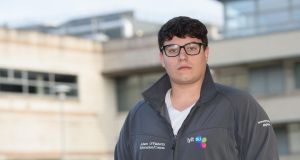 Adam O’Flaherty, like many students at Letterkenny Institute of Technology, knows how difficult it can be to make ends meet.

He is entitled to a means-tested grant and has had to juggle part-time work with study to get by.

Letterkenny IT has the highest proportion of grant-holders of any third-level college in Ireland, with almost three-quarters of its full-time students entitled to some form of financial assistance from the State.

Data from the Higher Education Authority (HEA) shows the college has the highest proportion of students from poorer backgrounds of any Irish higher education institution.

Almost one in four students (24 per cent) come from an area categorised as disadvantaged, while a tiny proportion (4 per cent) are from affluent areas.

“It’s hard for a lot of students, 100 per cent,” says O’Flaherty, who studied digital media design and is now the college’s students’ union education officer.

“I can’t understand how people can afford to go to universities in cities where everything is so expensive. It’s not an option for students here, unless you get a full grant and have a lot of savings.”

About 250km away in south Dublin, the picture – in many respects – is very different. UCD has one of the highest concentrations of students from the wealthiest parts of the city and country.

Joanna Siewierska, UCD’s students’ union president, says the college attracts high numbers of students from affluent backgrounds due to its location. But she says the college’s access population is growing and life is not as homogenous as the figures might suggest.

“Many of our students are really struggling with paying rent and buying food while in college – the two most basic necessities for students,” says Siewierska.

“Even those who can afford to pay Dublin rents can find themselves struggling in today’s reality where there is not enough accommodation units for everyone.”

Notwithstanding these qualifications, the latest data compiled by the HEA shows in stark terms the gap between rich and poor in third level. Those from well-off families are much more likely to progress to higher education.

But even within the higher education system itself, much higher proportions of wealthier students are in the university sector and dominate high-points courses in areas such as medicine, finance and engineering.

Overall, about 15 per cent of the population is defined as “affluent”. Within higher education, the proportion of students from this background rises to 20 per cent. And within prestige courses such as medicine, this rises to 36 per cent.

By contrast, about 15 per cent of second-level students nationally are defined as “disadvantaged”. This falls to 10 per cent within the higher education student body, and plummets to just 3.5 per cent within university courses such as medicine.

Overall, the figures show that well-off families still have a firm grip on university places, despite the rapid expansion of higher education and the introduction of “free fees” two decades ago.

It is clear that the bulk of the growing numbers attending third level in recent decades has been concentrated on institutes of technology. The top universities, on the other hand, seem – in relative terms, at least – to have maintained their reputation as bastions of privilege.

This is despite numerous access initiatives and attempts to broaden student intake. The figures are important for policymakers seeking to promote greater equality of opportunity.

So, what can be done to bridge this gap? And are access initiatives simply tinkering around the edges of a problem that has existed for decades?

While the Irish Universities Association says it has been very proactive in encouraging and supporting progression into higher education, it says many issues around access go back to attainment in the Leaving Cert.

The vast majority of admissions to the university sector require points within the 405 to 600 range. The HEA report, it says, highlights the strong and direct correlation between the points achieved at Leaving Cert and socioeconomic background.

For example, some 27 per cent of those who score within this range are from affluent backgrounds compared with 4.5 per cent from disadvantaged backgrounds.

It also says it is important to delve deeper into the headline statistics.

For example, while a university such as UCD has just 5 per cent of students from disadvantaged background – about 1,300 students – this is greater than the 24 per cent of those in the same disadvantaged category in Letterkenny – 1,035 students.

It says the school and institutional commitment, investment and effort required to ensure earners from the most disadvantaged section of Irish society get 300 points or more to get into high-demand university courses should not be underestimated.

The umbrella body for institutes of technology says there are clear policy choices for government in trying to tackle the class gap.

Dr Joseph Ryan, chief executive of the Technological Higher Education Association, says more funding is needed to ensure those institutions that reach out as part of their everyday activity to reduce disadvantage are adequately funded to do so.

“Institutions with high deprivation indices should receive significant additional funding that should be targeted at extra resources that are required to support vulnerable students through to completion,” he says.

For students such as Siewierska, the work to bridge the gap is an issue of social justice. She is from the Dublin 17 area, which has one of the lowest third-level participation rates in the capital.

She says interventions need to start from as early as childhood and pupils in schools need supports which raise their aspirations. Supports and grants must follow to ensure students can get through college rather than struggling to make ends meet.

“I was one of the few girls from my school to go to UCD, and if I wasn’t living in Dublin there was no way I’d be able to move out and pursue my degree,” says Siewierska, who studied law and social justice,

“This is a systemic issue and a question of social justice for all of us in society – why do we allow a system to remain in place which perpetuates this kind of inequality?

“Education should enable access to a better life and standard of living and the aim should be to reduce inequalities, which reduces pressures in society and benefits everyone.”