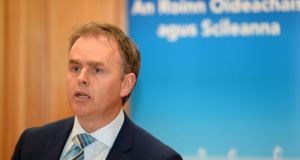 Minister for Education Joe McHugh said that there is “unfinished business” to be addressed on the issue of pay equality. Photograph: Dara Mac Dónaill

Teachers’ unions are threatening industrial action if the Government does not make a firm commitment over the coming days to restore pay equality for thousands of their members hired since 2011.

The warning comes as teachers’ annual conferences get under way this week with pay rates for so-called “new entrants” set to dominate the agenda.

Last Easter, all three teachers’ unions passed motions demanding that if the issue was not addressed by early May, a campaign of industrial action, up to and including strike action, would be pursued.

Ultimately, the Government last year announced plans to narrow the two-tier pay gap by allowing two “jumps” in increments under a new public sector pay deal for new entrants. The deal, worth between €1,000 and €3,600 a year, has benefitted about 48,000 new entrants.

While the Government has argued that these measures have effectively closed the gap, teachers unions’ say it stops short of full pay equality.

Minister for Education Joe McHugh has since conceded that there is “unfinished business” to be addressed on the issue.

Contacts between unions and Government officials have continued over the weekend with a focus on what kind of commitment can be secured to further bridge the pay gap for new entrant teachers.

One Government official said Mr McHugh’s speeches to teachers’ conferences on Tuesday and Wednesday were still being finalised and confirmed that they will address the pay issue. However, the source would not be drawn on the contents of the speeches.

The Irish National Teachers’ Organisation (INTO), whose conference gets under way on Monday, says its main concern focuses on members hired between 2011 and 2014 who will continue to face financial losses in future years.

The union narrowly rejected last year’s new entrant pay deal and an INTO spokesman said the union remains “committed to a ballot on industrial action in the event that this ongoing engagement with Government fails to deliver a pathway to pay equality for the 2011 to 2014 cohort”.

The INTO spokesman said the union was urging the Government to take the opportunity of the teachers’ conferences to “pledge to our members that the remaining pay scale issues” will be addressed.

The Association of Secondary Teachers’ Union Ireland (ASTI) and the Teachers’ Union of Ireland (TUI) – whose annual conferences get under way on Tuesday – are also seeking the restoration of pay for new entrants.

Despite last year’s pay deal, they argue that teachers hired since 2011 earn significantly less than their longer-serving colleagues over the course of their careers.

This, they say, is due to the abolition of allowances for post-graduates qualifications and differences in the early points of payscales for new entrant teachers.

The ASTI, which narrowly rejected last year’s new entrant pay deal, has warned that it will ballot for industrial action if these issues are not addressed.

The TUI, while it voted to accept last year’s new entrant pay deal, maintains that it has a mandate for a campaign of industrial action on foot of a vote it held on pay inequality in 2017.