Is my child being bullied in secondary school?

Parenting: How can you tell if your child is being bullied - what are the warning signs? 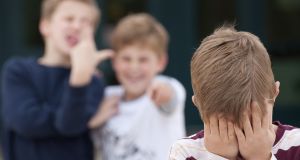 Teens mightn’t be willing to talk to adults about the problem. Photograph: iStockphoto

If your child is being bullied, the temptation can be to rush in to the school, all guns blazing, and solve the problem. But sometimes a more delicate approach can be more helpful - especially when you’re dealing with teenagers who will soon have to face the reality of the big bad world.

Bullying can happen to anyone, but some young people are more vulnerable than others, including those with a disability or special educational needs, children from ethnic minorities, Traveller children and LGBTI children. That said, a UNICEF survey carried out in 2018 found that 44 per cent of Irish teens had been subjected to violence at school, so the problem is pervasive - and there’s a reasonable chance that your child may become a bully’s victim, or be a bully themselves. For more read here.

How do I know if it is bullying?

It’s basic biology: teenagers don’t have great impulse control. And for those particularly lacking, there’s a greater risk that they will taunt, torment and exclude classmates or peers - especially if their targets are easy enough to single out.

Department of Education guidelines define bullying as “unwanted negative behaviour, verbal, psychological or physical, conducted by an individual or group against another person (or persons) and which is repeated over time… including cyber-bullying and identity-based bullying such as homophobic or racist bullying.” For more read here.

Deliberate exclusion and malicious gossip are considered as bullying. And at secondary school, sexual harassment and assault and cyberbullying become a bigger risk, with a survey in 2015 finding that one in four Irish teens had been cyberbullied. For more read here.

Isolated or one-off incidents, the department says, are not bullying but should be dealt with under a school’s code of behaviour.

And of course, teenagers suffering from hormonal mood changes and naturally distancing themselves from their parents can make it harder to spot those tell-tale signs: there’s a fairly clear crossover between some fairly typical teen behaviours - being withdrawn, low self-esteem and low confidence, moodiness and aggression, changes in school reports, bullying of their siblings, going straight to their room when they come home from school - and the signs of bullying.

Teens mightn’t be willing to talk to adults about the problem, possibly because they’re ashamed or embarrassed and fear that telling will make matters worse.

A guide to helping teens cope with bullying from Barnardos the child and family agency, Tusla, also urges parents to look out for telltale signs including unexplained injuries, frequent minor illnesses, less interest in everyday activities or spending time with friends, being oversensitive to criticism and self-harming.

Teens will be teens, right?

Wrong. If left unaddressed, bullying can lead to depression and low-self esteem as adults as well as ongoing emotional problems. Bullying can also have an impact on a child’s school work.

What are the school’s obligations?

The Department of Education has compiled a comprehensive guide for schools to tackle bullying, and each school is required to have its own policy in place. Boards of management are required to make this policy available to parents, ideally on the school website or “readily accessible on request.”

If a school or teacher finds that bullying has occurred, they are advised to contact the parents of all parties and the actions that the school is taking in accordance with its policy.

If a child is being bullied, the teacher is first asked to calmly investigate and to try and restore the relationship between the two parties. Ideally, they should bring the two children together, if the bullied child agrees.

Problems tend to arise where a school puts the problem down to a “personality clash” rather than take any real or serious efforts to address it.

What if a parent isn’t happy with the school’s approach?

Schools should have a complaints procedure and the parent can escalate the matter to the school board of management. In practice, many boards can be reluctant to deal with this, particularly if it means going against a powerful principal. Parents can bring a complaint to the Ombudsman for Children and, while only a tiny fraction of these complaints will proceed to an investigation, the threat of an OCO investigation can prompt a school to take action.

* Talk “side-by-side” rather than “face-to-face”: sitting teens down for a talk can overdramatise the situation and make the young person clam up, so take opportunities to talk to them on an ongoing basis during normal situations, such as in the car or while cooking in the kitchen. Ask about their life and friends and gently share any concerns you might have.

* Emphasise the importance of talking, explaining that a problem shared is a problem halved.

* Young people who are being bullied can feel very isolated, but parents can help by encouraging their child to make new friends. Talk to the child about their interests and sign them up for a sports, music or drama club.

* If the bullying is because your child is (or perceived as) LGBT, or because of their ethnicity, disability or membership of the Travelling community, the issue lies with the school, and it’s vital they address it in their bullying policies.

* If they’re being cyberbullied, be sure to keep screengrabs and compile evidence to make the school address it. Don’t let your child have unsupervised access to a phone or the internet

* Be supportive: let the child know that their home is a safe space and that they can always talk to you without fear of judgement or being in trouble.

* Keep listening: talk with your child about the problem and make sure to empower them by helping them look at solutions.

* Work on strategies to deal with the bully, including assertiveness, indifference and eye contact. Don’t tell them to physically fight the bully, as tempting as it is: they may simply get in trouble themselves.

* Help develop their social awareness: victims of bullying have their self-esteem chipped away and feel they have caused the problem themselves, but gently explaining that the issue lies with the bully, not them, can help.

* If your child is suffering from anxiety, stress or depression, counselling can help.

For more on this topic, check out Stella O’Malley’s article on how to stop your child from being a bully. Or check out the national anti-bullying website, TackleBullying.ie