Ask Brian: Engineering is a very practical way to address issues such as sustainability 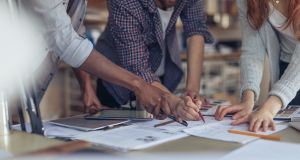 Engineering is one career route for students who want to do their bit to protect the planet. Photograph: iStock

My daughter is very environmentally conscious and a keen Greta Thunberg fan. She wants a career which involves fighting climate change, but I’m worried that she’s ignoring other sectors with decent salary prospects. Is there an area of study which has the best of both worlds?

Climate change awareness and activism among young people is fuelling a big interest in a range of careers linked to the environment and sustainability. Many are seeking out careers wherein they can be at the vanguard of social and environmental change.

To view a range of courses in the engineering area where young people can make a major contribution to protecting the planet, alongside strong career prospects, visit careersportal.ie/courses.

One of the newer options is building engineering, which concerns everything from heating, cooling and ventilation systems, among other functions, in large, commercial-scale premises.

Big projects such as data centres and hospitals, for example, are now more technologically advanced. Up to 60 per cent or more of the capital allocation for such multimillion-euro projects is attributed to the design, implementation and maintenance of these systems.

While previously it might have been architects or structural engineers who would be the best known professions in the construction sector, the building engineering industry has been working closely with TU Dublin and others to jointly market the profession to the wider public.

We spend up to 90 per cent of our time in buildings which require energy for heat, light, power and ventilation. Buildings are one of the biggest end-users of energy, followed by transport and industry.

A spokesperson for TU Dublin has confirmed that the growing level of environmental awareness among school leavers is leading to a high level of interest in their building engineering programmes. Demand is also rising for professionals in this category, with an estimated 10 jobs advertised for every one graduate coming out the system. Starting salaries are also high with students being headhunted before they reach their final year on salaries in excess of €30,000 per annum.

At TU Dublin, students can start a building engineering course at level seven (ordinary degree), which is a three-year full-time programme.

Upon graduation, some will then take up full-time employment, but a large number continue up to level eight (honours degree) choosing either full-time or part-time options. Students can also enter the level eight programme indirectly by first completing an applicable feeder course such as the TU Dublin engineering (general entry) course.