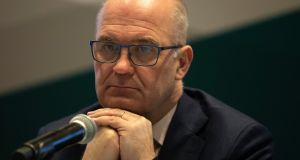 Ireland is beginning to flatten the curve again “through the solidarity shown by families and communities across the country”, Chief Medical Officer Dr Tony Holohan said on Saturday night as Nphet announced a further 77 deaths of Covid-19 patients.

The National Public Health Emergency Team (Nphet) also reported 1,910 further cases of the disease, bringing to 186,184 the total recorded cases to date and the total number of deaths in the pandemic to 2,947.

Saturday is the first time the case number figure has dipped below 2,000 since January 1st even though the number of deaths from the disease remains high and hospitals in the Republic remain under severe pressure.

HSE chief Paul Reid tweeted on Sunday morning that it was “battling to hold the levels of care that we value & to save lives”. He said 650 Covid-19 patients were receiving some level of critical care, with 214 in ICU and 436 on advanced respiratory support. “It’s not an Emergency Dept crisis now but it’s probably more critical than that,” he added. There were 1,893 people in hospital with coronavirus at 8pm on Saturday.

The head of the Irish Nurses and Midwives Organisation (INMO) has warned that upgraded safety standards are urgently needed in Irish hospitals where Covid-19 infection rates are “out of control” and “directly harming frontline staff”,

Phil Ní Sheaghdha, INMO general secretary, has called on the HSE to introduce urgent upgrades to safety measures for hospital staff including a national requirement that high-standard FFP2 masks be used in all healthcare settings, not just basic surgical masks. The INMO said the distance between beds must also be increased from one metre to two and that regular testing for all staff in healthcare settings should be carried out on a rolling basis.

Our teams are battling to hold the levels of care that we value & to save lives. 650 #COVID19 patients are now receiving levels of critical care. 214 in ICU & 436 on Advanced Resp support. It's not an Emergency Dept crisis now but it's probably more critical than that. @HSELive

Chief Medical Officer Dr Tony Holohan said: “Through the solidarity shown by families and communities across the country in recent weeks, we are beginning to flatten the curve of Covid-19 infection.

“Each individual effort to follow the public health advice is making an impact, but we can only continue this positive trend and drive down incidence in the community by continuing to stay at home and avoid meeting or mixing with others in our social circle, including for any close family gatherings, such as birthdays or funerals, as these can be ‘super-spreader’ events.

“We know it is possible to have Covid-19 without displaying symptoms, so we all need to behave as though we are infectious and minimise our close contacts with others. If you suspect that you might be ill, isolate away from others in your household, let your close contacts know and come forward for testing as soon as possible.”

Earlier, Taoiseach Micheál Martin said Ireland faced Covid-19 restrictions for the first six months of the year and noted a problem with the supply of AstraZeneca vaccine would delay the rollout to the over-70s.

He also said schools would not be fully open to all students before St Patrick’s day and confirmed the Cabinet would be considering restrictions to foreign travel when it meets next week.

Mr Martin said while he wasn’t necessarily suggesting a six-month lockdown, the Government would be taking a “cautious and conservative approach” with regard to reopening the country, particularly in light of the new variants of the virus.

Nphet has advised that restrictions currently in place should be extended to the end of February, denting hopes of a reopening of the construction sector at the start of next month.

Sources expect that restrictions will be extended until at least the end of Februar but speaking on RTÉ Radio One on Saturday morning, Mr Martin said to relax some restrictions next month, figures for Covid cases must be “well down”. He said he was concerned about the UK variant, as it is currently responsible for 62 per cent of cases.

“It transmits more easily. If we have mass mobilisation, and mass socialisation, it will spread again. I think with the vaccines coming, there’s a need to be cautious and conservative for the first half of this year until we roll out the vaccines,” he said.

“We will be witnessing far more prolonged restrictions than we have to date. I’m the Taoiseach, but I have to consult with my colleagues and Ministers, and we’ll consult with the opposition as well, but that is my sense of it until we get control.”

He added: “I’m not saying there’s a six month lockdown by the way, I’m saying simply we will have a conservative and cautious approach to reopening and we’ll be looking at this every four weeks.”

Mr Martin said that by the summer, there will be a “changed environment” because of the large-scale vaccination that will have been achieved by then.