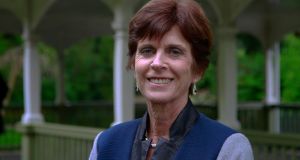 Oxford University’s vice-chancellor Prof Louise Richardson: said the Government needs to restore third level in the State’s universities if Ireland is to benefit from the opportunities after Brexit. Photograph: Nick Bradshaw

Academics in the UK are showing an interest in moving to Ireland because of Brexit, but there is an urgent need to substantially increase investment in Irish third level education, Oxford University vice-chancellor Prof Louise Richardson has said.

Speaking at a British Irish Chamber of Commerce conference, Prof Richardson said there was a requirement that researchers benefiting from EU grants spend 50 per cent of their time in a member country and that “Ireland is the easiest option for many people”.

However, she said the Government needed to make a “financial settlement” – especially in light of recent economic growth – and restore third level in the State’s universities if Ireland is to benefit from the opportunities.

The lack of education funding was evident, with Irish universities falling in global rankings, she told the conference, which sought to identify ways to increase co-operation in research and higher education post-Brexit.

Prof Richardson said her message to the UK government was that universities were vital to economic growth. She said it was essential that the UK had the strongest possible relationship with the EU and retained the ability to undertake world-class research, attract the best academics and ensure “freedom of movement”.

Prof Richardson, who was born in Co Waterford, said she would like to remind the EU that six out of 10 leading European universities were based in the UK.

She said there was a risk that Irish students coming to the UK to study, of which there are currently 260 in Oxford, would have to pay international fees post-Brexit, while everything possible needed to be done to ensure British universities could continue to attract an international mix of the best researchers and students.

Niall FitzGerald, an Irish businessman based in the UK, said Brexit was a serious threat – “existential in its potential impact” – but much more progressive outcomes would be achieved if it was approached “as a catalyst rather than catastrophe”.

This was particularly the case in terms of collaboration between Ireland and the UK on research, innovation and higher education, said Mr FitzGerald, a former chairman and chief executive of Unilever.

“We’re not here to second-guess Brexit – an unproductive exercise at the best of times. Instead we should be looking at how changes that Brexit brings – whether welcome or unwelcome – can generate fresh opportunity for the UK and Ireland to collaborate even more,” he said.

On the Brexit negotiations, he told The Irish Times it was critically important for the island of Ireland that a deal on issues including the Border issue is “done, signed, sealed in the cold light of a June day” and not a minute to midnight when the main negotiations were concluding in October.