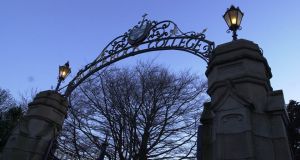 Blackrock College was among those schools who resisted the plans to abolish the so-called “old school tie” provision. Photograph: Cyril Byrne

The Ombudsman for Children has said there is “no justifiable reason” to allow schools to give children of past pupils priority in their enrolment.

At present, schools – especially in the fee-paying sector – are free to set aside as many places as they wish for children of past pupils.

Minister for Education Richard Bruton’s new School Admission Bill will place a 25 per cent cap on the number of school places that may be set aside.

However, Ombudsman for Children Dr Niall Muldoon expressed concern that retaining this past-pupil measure could discriminate against Travellers, immigrants and families that are new to an area.

Labour Senator Aodhán Ó Ríordáin described the move as a “clear capitulation to the fee-paying sector”.

Plans to abolish the so-called “old school tie” provision have been resisted by the past pupils’ unions of two of the country’s best known fee-paying schools, Belvedere College and Blackrock College, when they were first proposed by the previous government.

A spokeswoman for the Department of Education said Mr Bruton had proposed the 25 per cent restriction, which was agreed with members of the Oireachtas education committee last year.

Mr Bruton’s plan to remove the “Baptism barrier” for entry to Catholic primary schools from September of next year, meanwhile, drew a mixed response on Wednesday.

Under amendments to school admissions legislation, all Catholic primary schools will be prohibited from giving enrolment priority to baptised children in cases where they are over-subscribed.

The vast majority of primary schools – just over 90 per cent – are of a Catholic ethos.

However, minority faiths, such as the Church of Ireland, will be allowed to prioritise members of their religion in order to protect their ethos in cases where they are over-subscribed.

This exclusion has been introduced to help ensure children of minority faiths can still access a school of their own religion.

The Catholic Primary Schools Management Association said removal of the “Baptism barrier” was not necessary as the provision of extra schools would ease the problem of the shortage of school places.

“The issue is the lack of school places, not religion. Ninety-five per cent of schools are not over subscribed,” its spokesman said.

“The Minister announced he is building 16 new schools. He’s solving the problem, so I don’t know why there is a need for this.”

The Catholic Archbishop of Dublin Diarmuid Martin also said he felt religion was not a problem in accessing schools.

Rather, it was a matter of parents applying in large numbers to schools perceived to be better than others.

Opposition parties, on the other hand – whose support will be crucial to the legislation being passed – were broadly supportive of the plan.

Sinn Féin expressed support for the move, while Labour called on the Minister to end the “Baptism barrier” as soon as possible. Fianna Fáil is to examine the plans at a meeting of its parliamentary party.

Most equality campaigners have expressed support for the move.

The Irish Human Rights and Equality Commission stated it would help protect children from discrimination.

“Parents have expressed that they feel under pressure to baptise children in order to access schools,” said Emily Logan, the organisation’s chief commissioner.

“The Commission welcomes the proposed amendments, which once enacted in law will see equality in schools’ admissions policies, and ensure that children can have equity of access.”

“Finally, parents will be able to enjoy the right to freely choose and practise their own beliefs without the fear of being refused a school place as a result,” said April Duff, the group’s spokeswoman. “It will come as a huge relief to many parents who currently fear discrimination because of their beliefs.”

Dr Muldoon also welcomed the changes as a “significant step”, but noted that provision which allow minority faiths to continue to use religion as a criterion in the admissions process remained.

He said no child should be denied access to publicly funded education on the grounds of religion.