Catholic grip on education being loosened 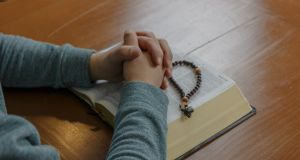 Is it fair that publicly-funded schools are allowed to discriminate against non-religious children in their admission policies? Photograph: iStock

Is it fair that publicly-funded schools are allowed to discriminate against non-religious children in their admission policies?

It’s a question that goes to the heart of Minister for Education Richard Bruton’s plans to remove the “Baptism barrier”.

Details of the amendment to school admissions legislation, released today, confirm that religion will be removed as a ground for entry to over-subscribed Catholic schools from next year.

It means most non-religious families will, finally, be able to access their local State-funded primary school on the same basis as other citizens.

It is also a recognition that our education system needs to catch up with the reality of modern life.

Some 95 per cent of primary schools remain under the patronage of the Catholic Church or other religious groups.

Society, however, has changed dramatically in recent decades.

Close to 40 per cent of marriages now are civil or involve non-denominational ceremonies.

About a fifth of families of parenting age describe themselves as non-religious.

The result is that as many as a quarter of parents, according to some surveys, have baptised their children simply to help gain access to their local school,

The changes will help ensure that most children are on an equal footing when it comes to accessing their local school.

The fact that most political parties are broadly supportive of the move is an indication of the waning influence of the Catholic Church, which is opposed to the move.

Catholic schools - the majority of whom have a good track record in accepting children of all faiths - may well feel aggrieved and singled out under the plans.

But with control over 90 per cent of the primary school system, it is difficult to make the argument that they are being victimised.

Their ethos will not be threatened - and Catholic children will be now be on the same footing when it comes to school admission as non-religious pupils.

Records obtained by The Irish Times earlier this year reveal the depth of opposition from some Catholic bishops and trustee bodies, along with management bodies and missionary groups.

It seems some are preparing to fight these issues in the courts, if required, and believe constitutional provisions, along with case law, give them good grounds to challenge any move which would discriminate against faith schools or parental choice.

Many see this as a fight not just over admission rights, but over something much broader: a secularisation agenda aimed mainly at the Catholic Church.

Their arguments against the Baptism barrier plans tend to dispute the scale of the problem of children being turned away from schools on religious grounds. Many also insist the ethos of schools will be under threat.

There is an contradiction here, of course: it’s hard to maintain that there isn’t a problem, when it also has the capacity to undermine a school’s ethos.

More convincingly, they argue that the real issue over difficulties accessing school is a shortage of school places.

The removal of the Baptism barrier, they say, will not do anything to improve access to over-subscribed schools in general.

Bruton maintains that the changes balance the rights of minority religion, Catholic and non-denominational families.

He also believes the amendments, approved by the Attorney General’s office - are “constitutionally robust” and will withstand any legal challenge.

The loudest argument against the removal of the “Baptism barrier” had been made by minority faiths such as the Church of Ireland who feared their ethos would be under threat.

Mr Bruton’s amendment which allows minority faiths to continue to use religion in their admission policies is likely to ease most of their anxiety.

There are many who will argue that religion should be tossed out altogether from admissions policies.

However, competing articles of the Constitution – which protect both the right to religious education and protect against religious discrimination – mean that this is unlikely anytime soon.

One thing seems certain: Bruton’s plans are not the end of the story when it comes to reducing the hold of religious bodies on our schools.

There may well be legal or Constitutional challenges coming down the line.

Assuming the Baptism barrier is removed for Catholic schools, it is certain the focus of equality campaigners will simply move on to the place of religious instruction during the school day and the transfer of patronage away from Catholic bodies.

The fight for an equality-based education system, in many ways, has only just begun.