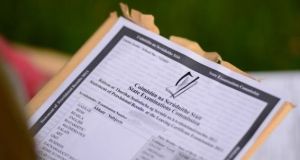 This year’s Leaving Cert results will not be issued until September 7th. File photograph: The Irish Times

Students and third-level colleges have expressed anger and frustration over delays to issuing this year’s Leaving Cert results.

More than 60,000 Leaving Cert students will this year receive their grades several weeks later than normal on September 7th, the Department of Education has said.

CAO offers for college places will be issued four days later on September 11th, which means many students may not start their third-level courses until October.

Third-level colleges have privately expressed alarm at the later than anticipated starting times for students, which, they say, will pose logistical problems in running courses and exams.

Students took to social media to criticise the delay, which, they said, will add to uncertainty and anxiety, along with difficulties securing accommodation, given that first years will start college later than other students.

The length of time it is taking to issue the grades is understood to be linked to the challenge of accurately applying the new system of predicted grades for more than 450,000 individual grades.

‘As close as possible’

In a statement, Minister for Education Norma Foley said her department has been committed to issuing the grades as close as possible to the usual mid-August timeframe.

“I know that many students will be anxious while awaiting their results. I want to assure them that the people working on this are taking every precaution to ensure fairness so that students can receive the grades that reflect their work,” she said.

“This standardisation process at national level is essential for fairness and equity. It is really important to me that we deliver these calculated grades to the highest possible standards, and that the outcomes are fair to students.”

Ms Foley said all individual grades will have to be checked and reviewed using different demographic characteristics – including gender and socio-economic status – to ensure they are as fair and equitable as possible.

“I want to make sure that this work is done rigorously – so that the results of Leaving Certificate 2020 are of the same high quality and reliability as the results in any other year,” she said.

“This is yet another example of a department stumbling from crisis to crisis. This is a hugely disappointing turn of events for students and it adds to the uncertainty, stress and anxiety they have had to face during the Covid-19 pandemic,” he said.

“Not only that, it raises serious questions about how the new third-level year will work and when it will commence.”

The Department of Education said the student portal for Leaving Cert candidates will reopen on Monday, July 20th, to allow students to formally opt in to receive calculated grades in September.

It has said each student will receive a text message alerting them to this and urged recipients to respond and opt in online.

A number of other education systems have also used predicted grades for their students this year due to challenges organising exams amid the Covid-19 pandemic, including the A-Levels in the UK and the International Baccalaureate. However, some of these arrangements have already sparked controversy.

Results for more than 170,000 students who took the International Baccalaureate diploma programme were released last week.

Overall, there was a rise in the average score for the students undertaking the diploma programme worldwide.

However, school leaders criticised what they said was a lack of transparency over the grading process, while some teachers and students expressed shock at significantly lower-than-expected results.

Hundreds of students took to social media to express their disappointment and frustration over their grades on social media, with many using the hashtag #IBscandal.

The Irish higher education system, meanwhile, is understood to be seeking tailored public health guidelines for the sector.

One option being explored is whether social distancing rules of 2m in lecture halls could be reduced to 1m, if all students were required to wear face masks.

This, say sources, would allow colleges to schedule more lectures on-campus and allow students to spend less time learning remotely. Formal guidance is likely to be published for the higher education sector next week.