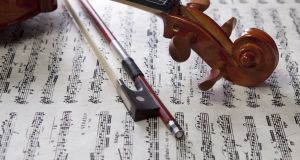 Siofra Cox, a teacher at the Convent of Mercy in Roscommon, said the Leaving Cert music exams at both higher and ordinary levels were “very clear and straightforward”. Photograph: iStockphoto

Siofra Cox, a teacher at the Convent of Mercy in Roscommon, said the exams at both higher and ordinary levels were “very clear and straightforward”, providing students with a “just and balanced” test.

Irish composer Gerald Barry’s Piano Quartet No 1 came up as the main question in the listening paper, which students should have found manageable, she said.

Students would have been reasonably challenged by some sections of some questions in the listening exam, which required them to compare excerpts of music with music which was not played in the exam.

“This provided a good test of students’ familiarity and aural memory of the overall works,” Ms Cox said.

Students’ melodic and rhythmic dictation skills at higher level were put to the test regarding the vocal line of Queen’s Bohemian Rhapsody in question two .

There were no surprises in the Irish music question, with questioning in line with previous years.

She said essay titles included the uilleann pipes, céilí band, the musical style of a group and Irish music in North America.

“These should have been very approachable topics for the well-prepared student,” she said.

Excerpts from the symphonic suite Scheherazade by the Russian composer Rimsky-Korsakov featured as the previously unheard piece.

The composition papers at both levels featured a choice of questions and students should have had no problem in attempting these skills-based questions, Ms Cox said.

“All composition questions were in a major key this year so students had no opportunity to be melancholy leaving the exam,” she said.

Susan McCormick, a teacher at the Institute of Education, also felt the paper was “fair and manageable”.

She said question one – on melody – had an upbeat, which was to be expected. However, the length of the upbeat may have thrown some students.

“The question was very similar to one that came up in 2014, so if students had studied their past papers they’d be fine,” she said.

Ms McCormick said question five on harmony was very straightforward in both chord choice and bass line – with the exception of Bar 14, which posed a challenge to find a suitable chord progression.