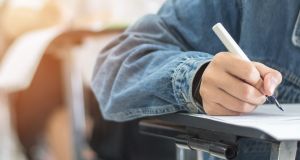 Students sitting higher-level Irish paper two will have been pleased with a broad and varied paper that had something for everyone, particularly in the essay section, teachers have said.

“The last essay title - the uneasy political relationship between countries of the world today would have proved challenging, as, irrespective of a student’s level of Irish, it required them to have specific knowledge of world events,” said Clare Grealy, an Irish teacher at the Institute of Education.

John Gavin of LeavingCertIrish.com said that three of the essay titles he had prepared students for came up, including the housing crisis, women in sport and changes in Irish society. “They could have brought in a wide range of topic for this, although the phrase ‘athruithe chun feabhais’ (changes for the better) may have been interpreted incorrectly. One essay on the enjoyment and pressures of second level life should be approachable by most.”

Mr Gavin said that many students predicted that the health service would appear in the essay titles but, in the event, the closest topic was in the debate and speech section, where students were asked to write about young people taking good care of their health. “It would have taken a pretty decent student to rework their material here, and if they had banked entirely on this topic in the essay section, they may have been in trouble,” he said.

For the story section, Ms Grealy said that students would have understood the seanfhocal “sense doesn’t come before age”, but she would be less confident that all students could understand the first story title ‘fhoiseamh’, meaning “relief”.

Mr Gavin was very happy with the ordinary level paper, he said. “The titles included how they spent last summer, their feelings on their school and how they spend their free time, and these were perfect. There was a nice story option about being in the airport and realising they’d forgotten their money and passport. Quite a lot of the sraith pictiúr (pictures used in the oral exam) came up on this exam so they will have been able to recycle them. Overall, I think it was a fair, broad and attractive paper.”

Studyclix.ie Expert Teacher and Irish Teacher at Jesus and Mary Secondary School Enniscrone Emer McTernan said that ordinary level students will have welcomed this year’s paper. “Many will no doubt have chosen to refer their Sraith Pictiúir and write a story of their experience at the talent show. Students were also able to draw on other personal experiences while writing about their school, how they spent last summer, and how they spend their free time.”