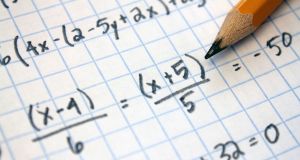 The higher level maths paper two was relatively fairer and more accessible than the ordinary level paper, according to Eamonn Toland of TheMathsTutor.ie.

“The trend continues for variations of questions to be reused across the Junior Cert Higher and Ordinary level papers, which may be a potential disadvantage in some cases for ordinary level students,” he said.

“The higher level paper had plenty of accessible material for all students, with just a few challenging parts for those looking for higher grades. Question four was about a soccer pitch and needed good interpretation skills to recognise it was an application of a circle theorem, while question 12 would have been welcomes as one of the easier theorem proofs on the course.”

Work out the total number of different possible combinations that Margaret could pick.