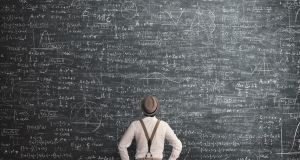 The second higher-level maths paper was tougher than Friday’s Paper One, teachers have said.

“Students would have been far less happy leaving this paper,” said Aidan Roantree, senior maths teacher at the Institute of Education in Dublin. “Indeed, one of the only saving graces is that financial maths did not make an appearance here, unlike last year. Whereas it was too much to expect as straightforward a paper as on Friday, there was a significant jump in standard going from Paper One to Paper Two.”

Eamonn Toland, founder of TheMathsTutor.ie, agreed that paper two was “quite challenging. There were a lot of tricky geometry. Even question one was not completely straightforward.”

Mr Roantree said that most of the difficult parts occurred in Section A, and many students are likely to have scored better in Section B than in Section A.

“Out of the 18 question parts in Section B, four or five were challenging. The others would have been familiar to most students. In Section A however, six of the fourteen question parts were at the upper end on the scale of difficulty. Besides a very benign Question 2, each of the other questions in Section A had the potential to put off students.”

The ordinary level paper, in contrast, was “manageable but long”, said Jean Kelly, maths teacher at the Institute of Education. “There was a nice mix of topics within questions, but students will have needed the full two and a half hours to complete the paper. The language used was clear and concise and students were prompted in the right direction.”

Mr Toland said that the paper was, overall, a fair test for students at this level, with questions including a radar station, daylight savings and the price of potatoes. “The questions in section B were quite long and and contained lots of information and context, which can be a challenge for students in an exam situation,” he added.

Ms Kelly said that part B of question 5, on the speed at which water flows through a pipe, had not appeared before and might have been tricky for some students.

Question 8 (a) A motoring magazine collected data on cars on a particular stretch of road. Certain details on 800 cars were recorded.

(i) The ages of the 800 cars were recorded. 174 of them were new (less than 1 year old). Find the 95% confidence interval for the proportion of new cars on this road. Give your answer correct to 4 significant figures.

(ii) The data on the speeds of these 800 vehicles is normally distributed with an average speed of 87·3 km per hour and a standard deviation of 12 km per hour. What proportion of cars on this stretch of road would you expect to find travelling at over 95 km per hour?