Leaving Cert cancelled: Students who want written exam will have to wait 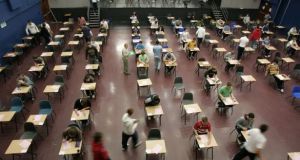 Teachers’ unions expressed concern about what safety measures would be in place for social distancing if the exams went ahead. File image: Frank Miller/The Irish Times

Leaving Cert exams are set to be cancelled and replaced with a “Plan B” in which students will be awarded grades based on their classwork, according to well-placed sources.

Students who are unhappy with their awarded grades will likely be given the option of sitting written exams at a much later date, possibly until later this year or early in 2021.

This, however, would be too late for students to take up their chosen courses in the coming academic year.

The Department of Education plans are to come before Cabinet on Friday. If approved, they will come as a relief to many of the tens of thousands of students and parents who have been craving certainty since the Covid-19 lockdown began.

Under the draft plan, schools will play a key role in awarding students’ grades based on a combination of their class rankings, performance in previous exams and assessments and other indicators.

While teachers will help determine these grades, the process will be technically overseen by school principals and senior management.

These grades would then likely feed into a process where final grades could be awarded by the department using a “bell curve” and school indicators.

Department officials are undertood to be keen not to refer to this process as predicted grades and, instead, are referring to it as an national standarised syststem.

Secondary teachers’ unions have signalled that they would be willing to support such a measure, subject to a number of clarifications and assurances.

The Association of Secondary Teacher Ireland (ASTI) and the Teachers’ Union of Ireland (TUI) held meetings on Wednesday night and on Thursday to discuss how the system would work.

Details such as when students’ grades will be available and what the likely starting dates for students progressing to higher and further education are still being examined.

The move towards producing a “Plan B” comes amid a growing concern over the health risks of the department’s original plan in pressing ahead with the exams during the summer when the coronavirus would be still circulating.

Both unions are understood to have expressed grave concern over the safety of proceeding with two weeks of school in July and staging exams during a private meeting with department officials on Wednesday.

Taoiseach Leo Varadkar told the Dáil on Thursday the Government would “try to bring a conclusion” this week to the uncertainty surrounding the Leaving Cert.

He said it was possible to carry out the exam within existing public health guidelines “but it would not be the Leaving Certificate as we know it.

“If it is cancelled we must make sure that we can put in place an alternative which would be fair, which is extremely difficult.”