Covid-19: Precision of tracing apps in doubt after TCD study 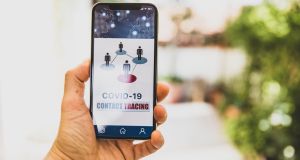 The TCD research found that certain behaviours by people can help the effectiveness of the Bluetooth function. File photograph: Getty

New research has cast doubts over the accuracy of contact tracing apps that use a phone’s Bluetooth technology which will be a core feature of the version being worked on by the Irish Government.

The study, by scientists at Trinity College Dublin, found that it is “likely to be challenging to use Bluetooth to reliably detect when people using contact tracing apps are within 2m of one another.”

Bluetooth technology, according to briefing notes prepared for Minister for Health Simon Harris, will be used to allow phones with the app installed to make an anonymous “handshake” which will be used to measure how close they are, and for how long.

This information will then aid contact tracers in determining who are the close contacts of a confirmed case of Covid-19.

However, Prof Doug Leith and Dr Stephen Farrell of the School of Computer Science and Statistics took measurements at several locations around Dublin and found problems with measuring accurately social distancing using Bluetooth.

“We found that the strength of the received Bluetooth signal can vary substantially depending on whether people walk side by side, or one behind the other. Whether they carry their phone in their back or front pocket, where they place it within their handbag, and so on.”

The TCD researchers also found that walls and furniture, especially metal objects such as shelves and fridges in a supermarket shopping aisle, or train or bus, could have “a significant effect”.

He urged the Government to undertake extensive testing of the app before it is rolled out, to try and identify and correct issues.

“Just collecting data is not enough; you have to have it in a known context so you can calculate its accuracy,” he said. “If you want to get high uptake, people have to trust the app and that’s partly to do with privacy and partly to do with whether it works.”

The research found that certain behaviours by people can help the effectiveness of the Bluetooth function by, for example, placing phones on the table during meetings. In areas where Bluetooth reception is problematic, they suggested entry or exit from the location should be logged by scanning a QR code, or similar, to enable another way of detecting times and places when people were in close proximity.

Prof Leith emphasised that contact tracing apps have to be accurate, not only to encourage use, but because false positives and false negatives “reduce the effectiveness of contact tracing and so make it harder to quickly ease current lockdown restrictions”, he said.

Privacy and civil liberties campaigners have also raised concerns around the app and reliability of the Bluetooth function. Writing in The Irish Times this week, Elizabeth Farriesof the Irish Council for Civil Liberties argued that Bluetooth signals can cross walls, potentially alerting someone who may have been in a neighbouring room to a confirmed case of a contact that never really took place.