Paris under tighter restrictions in French plan to ease lockdown 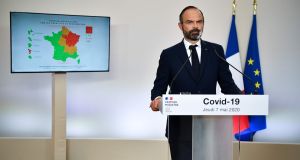 French prime minister Edouard Philippe presents the details for the easing of the country’s lockdown at the Hotel Matignon in Paris. Photograph: Christophe Archambault/Pool/AFP via Getty Images

French prime minister Edouard Philippe warned against “letting our guard down” when the country eases coronavirus lockdown restrictions next Monday.

Speaking at a press conference with the ministers of health, transport, the interior, education and the economy, Mr Philippe used a coloured map to illustrate how France has been cut in two by the Covid-19 epidemic.

The northeastern third of the country was shown in red, indicating that the virus is still circulating there, hospitals remain under pressure and the need for testing is substantial.

The western and southern two-thirds of France, where the outbreak is largely under control, were shown in green.

Post-primary schools will reopen only in “green” districts on May 18th. In areas that remained green, a further easing of restrictions would take place on June 2nd, Mr Philippe said. Those remaining red will see no change.

Results in the Paris region have been disappointing, Mr Philippe said. “The number of cases is diminishing, slowly but surely, but it is still higher than we had hoped for.” But the trend was in the right direction, so the lockdown would nonetheless be eased.

Visits to nursing homes continue to be banned, but Mr Philippe said the government might reconsider this in early June, for departments where the virus was less present.

Education minister Jean-Michel Blanquer said that 80-85 per cent of France’s 50,500 primary schools would reopen next week. “More than a million students will return to their classes and there will be 130,000 teachers to greet them.”

From Monday, residents of France will be allowed to go about freely, without the document and time limits imposed since mid-March, but only within a 100km radius of their homes.

Interior minister Christophe Castaner said a new form would be required for travel beyond 100km. Police will require proof that a journey is of “absolute necessity” for professional or family reasons, such as a death or a vulnerable person or child who needs assistance. The fine for violations will be €135.

During rush hour, public transport in the Paris region will be accessible only to people carrying statements from their employers. All passengers over the age of 11 will be required to wear face masks. People are urged to continue teleworking wherever possible, and businesses are to stagger working hours to avoid crowds on commuter trains and buses.

Small businesses that were forced to close under the lockdown will be exempted from all social charges for the months of March, April and May, finance minister Bruno Le Maire said.

Bending to pressure from the public and local officials, the interior ministry has agreed to consider requests by mayors to reopen some beaches and lakes.

Thursday’s press conference was supposed to clear up remaining uncertainties about the lifting of the lockdown, but many things remained unclear. Labour minister Muriel Pénicaud said her ministry would publish guidebooks for specific sectors that could not work remotely, such as hairdressers, by Monday.

The scale of testing also remains uncertain. The government had promised to carry out 700,000 tests per week from May 11th, but it may not have enough equipment. France intends to test only those who present symptoms of Covid-19. Scientists say up to one-quarter of those infected show no symptoms.