‘Schools are doing students a huge disservice by ignoring art’ 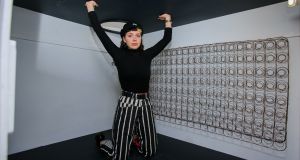 If you believe the stereotype, art college is a middle-class indulgence for students to dabble in before going on to get a “proper job”.

But, as far as the director of the National College of Art and Design is concerned, this is a a hopelessly outdated depiction.

In a world where artificial intelligence threatens to replace huge swathes of the workforce, Sarah Glennie says art college students are the closest thing we have to future-proofed graduates.

“All the major international think tanks say creativity is the number-one thing the education system needs to give to students,” says Sarah Glennie, director of NCAD. “Studies indicate that job creation will be shared equally between Stem [science, technology and maths] and the creative sectors in the years ahead.”

Her comments are backed up by some of the world’s leading educational thinkers, such as the Organisation for Economic Co-operation and Development’s Andreas Schleicher who has predicted that arts could become more important for young people than maths in the future.

“At the core of this is the idea of being able to think differently – and not fall into a groupthink or follow establishment patterns,” says Glennie.

This, she says, is a key consideration behind NCAD’s new five-year strategy, launched on Tuesday, which seeks to put “bold and curious thinking” at its heart.

“We can no longer predict the future of work, or the kinds of skills that our economy and society will need in the decades to come,” she says.

“However, with significant challenges ahead – such as climate change, digital transformation and automation – we will need independent thinkers to contribute to finding solutions to these challenges.”

Glennie says the college’s five-year strategy will mean that – in every decision the college makes – being bold and curious will be encouraged.

“Art and design education stimulates the creativity and imagination needed to make our environment sustainable, our societies inclusive and life richer,” she says.

For all the Government strategies which cite creativity as key national ambition, Glennie says this often isn’t backed up in the real world.

Too often, she says, the education system is narrowed to exclude creativity and prioritise academic subjects.

“We’re doing students a huge disservice . . . The education system right the way way through is pretty much ignoring it [the importance of arts and creativity].

“Parents too don’t always see a value in creative pathways in education. Increasingly, however, the importance of creativity in a dynamically changed world is being understood by all. NCAD wants to be a leader in that debate.”

She says arts in education is also often framed as a route to cultural experience for children. While she says this – in itself – is important, it should be about much more.

“Art education will only have very clear, tangible impacts when it is presented as a way to support critical reflection on the world, peer-to-peer learning and self-directed research,” she says.

Glennie notes that the Government has been keen to promote Stem subjects on the basis that they are regarded as critical to attracting foreign direct investment. But she says promotion of the arts also needs to be prioritised.

Parents, who play a vital role in their children’s career choices, should also consider that art is a very viable route, she says.

“Art and design education can offer skills and resilience that can be adapted across to meet needs of the economy and society,” says Glennie.

“I’ve a 10 year old – that will be his future . . . I genuinely believe, therefore, studying arts and design is one of the most relevant and important things you can do.”