Lack of online security for remote learning a concern for teachers, survey finds 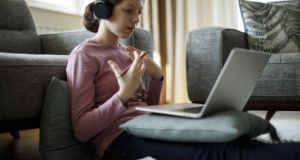 One teacher who responded to the ASTI survey said ‘top students’ were ‘choosing to disengage as it has all become too much’. Photograph: iStock

Teachers are concerned about a lack of online security guidance for remote learning given their interaction with children, often in “very intimate spaces” such as bedrooms.

Research presented by the Association of Secondary Teachers Ireland (ASTI) on Friday showed that 98 per cent of its members had set up virtual classrooms from their homes in the aftermath of Covid-19 school closures.

However, while praised for their instant adaption to the pandemic, many have outlined concerns about a new digital reality that has brought increased workloads, online meetings and stress.

Presenting the findings to its convention, education and research officer Moira Leydon said a “particular concern” recorded among 3,526 survey respondents was a lack of guidance from schools on digital security.

“[This included] GDPR concerns, child protection concerns; you are literally looking at children in their very intimate spaces of perhaps even their bedroom,” she said.

ASTI president Deirdre Mac Donald said the purpose of the research was to secure empirical evidence and qualitative data on the experience of remote learning, as opposed to mere commentary.

After schools closed last March, 68 per cent of respondents said they had received “continuity guidance” on remote learning from management.

“However, teachers reported that overload in terms of communication from school management . . . was pervasive. They were receiving daily, weekly if not daily emails, frequently outside of school time.” There was also an increase in staff and team meetings.

Of those surveyed, 86 per cent recorded a “significant increase” in their workload. Just 2 per cent said there was no change to their work-life balance. In fact almost one third (29 per cent) described this work-life balance shift as being “overwhelming”.

Teachers were asked what they were doing to look after themselves - less than half (48 per cent) were taking steps to support their mental health although a greater proportion (77 per cent) were mindful of physical health.

Ms Leydon said the survey garnered thousands of personal comments on the experience. “We have an absolute treasure trove of data on what was happening to teachers’ lives,” she said.

One respondent remarked upon a “constant sense of frustration at struggling and failing to deliver the level of tuition and guidance I could so easily deliver in a classroom”.

Another described a day consumed by “posting, chasing and correcting work and giving feedback and answering queries from students and parents”.

Students too were adjusting - one response described “numerous emails” from pupils who “can’t cope” in an environment devoid of face-to-face contact.

“Top students are now choosing to disengage as it has all become too much.” Some have “gone off the radar”.

On this particular issue, Ms Leydon noted that while in a school environment teachers could plan, maintain control and execute professional judgment. This was difficult in an online world “when you are not . . . catching the mood in the room and being able to respond to it”, she said.

The ASTI said there was also concern around expectations from management for teachers to give weekly reports on the extent of their engagement with pupils.