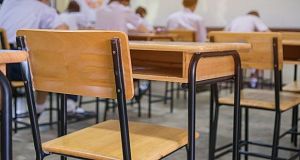 The Cabinet is due to be briefed on the details of the reopening plan on Monday, after which it will be published. File photograph: Getty

Hundreds of additional teachers, funding for enhanced cleaning regimes and curriculum changes form the centrepiece of a school reopening package worth hundreds of millions of euro to be unveiled on Monday.

The Government also expects to get the go-ahead to open schools from public health experts because of concerns about the psychological impact on children if they were kept closed or only partially opened.

Interim advice from the National Public Health Emergency Team (NPHET) earlier this month suggested the risk for healthy children from Covid-19 is “very low”. It also warned that an “atmosphere of fear and an overwhelming preoccupation with infection and hygiene can be harmful to teachers and pupils”.

On Friday, Taoiseach Micheál Martin and Minister for Education Norma Foley reiterated that the Government intended to reopen schools fully next month.

The Cabinet is due to be briefed on the details of the reopening plan on Monday, after which it will be published.

The package of measures is understood to include:

* Extra funding for hundreds of additional substitute teachers and support staff due to an anticipated increase in sick leave. Surplus primary school teachers may also be allowed work at second level in key subjects on a temporary basis;

* Curriculum changes to take account of lost learning, including greater choice of questions for students in State exams;

* Enhancing cleaning and hygiene routines, with hand sanitiser and personal protective equipment to be centrally procured and distributed to schools;

* A major emphasis on student wellbeing and enhanced access to guidance and other supports;

* A €75 million fund to allow schools to reconfigure their classrooms and toilet facilities over the coming weeks to allow for physical distancing of students.

Detailed guidelines on reopening safely are set to be issued to all primary and secondary schools early next week with templates on safe classroom layouts, along with rules to follow in the event of a Covid-19 outbreak.

Teachers’ unions have signalled they will support a return to work in the classroom, but only on the basis that public health guidelines and physical distancing rules are fully implemented.

They have also sought revised leave arrangements for teacher absences and to cater for those high-risk vulnerable teachers.

School managers and principals, meanwhile, have indicated that they can reopen schools fully as long as key supports and funding are in place.

However, the National Bus and Rail Union (NBRU) has warned of difficulties with school transport in September and said investment will be needed if social distancing is to be maintained.

Tom O’Connor of the NBRU said physical distancing rules could reduce the capacity of buses by up to 50 per cent, making it very challenging to carry the current number of children to schools in September.

He said many school coaches are smaller than regular coaches and screens would be needed to protect the drivers, which will require investment.

Meanwhile, the Oireachtas Covid-19 committee was told that the Government was considering testing visitors seeking to come to Ireland prior to their departure from their home countries.

Ken Spratt, acting secretary general of the Department of Transport, said arising from the Cabinet meeting this week officials had been asked to examine the efficacy and potential of such a testing system.

The Department of Transport also told the committee that it was moving towards introducing mandatory face coverings for passengers in taxis.

The Department of Health last night reported 20 new cases, and no new deaths from the virus. The figures came after Minister for Health Stephen Donnelly told the Dáil that public health officials were warning, based on how the disease is working around the world that “we are going to have a second surge”.