TD storms out of committee saying he didn’t ‘mesmerise anybody’ 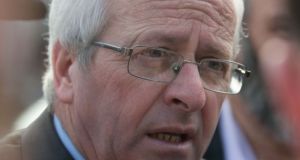 Independent TD Mattie McGrath chose to leave the Oireachtas committee examining the Eighth Amendment following a dispute in which he accused committee chairwoman Catherine Noone of bias.

The amendment guarantees to protect as far as practicable the equal right to life of the unborn and the mother.

Sinn Féin TD Jonathan O’Brien said he had been “mesmerised” following a lengthy contribution from Mr McGrath in which he accused the committee of unfairness.

During his contribution, Mr McGrath argued with Sinn Féin members and accused them of refusing to say where Jean McConville, one of The Disappeared, was buried.

Before exiting the room he said, “I’m leaving this charade right now, for today anyway.”