Parents protest as dozens of siblings are not offered school places 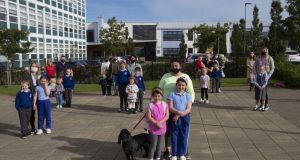 A group of parents protest over an end to sibling-first policies outside Our Lady’s Grove National School in Goatstown. Parents say it risks splitting up families and forcing children in the same family to attend different schools. Photograph: Laura Hutton

Dozens of parents have expressed anger and frustration after their children were this week not offered places to join their older siblings in school.

The enrolment controversy follows an instruction by the Archdiocese of Dublin to hundreds of primary schools to end their sibling-first admission policies.

Under the change, parity is now given to all children in the local catchment area, rather than giving preference to siblings of pupils, in over-subscribed schools.

Parents across a number of schools in Dublin and north Wicklow say their children have been placed on waiting lists and there is no guarantee they will be able to get school places. This, they says, risks splitting up families and forcing children in the same family to attend different schools.

A committee of concerned parents at Our Lady’s Grove Primary School on Goatstown Road in Dublin 14 has written to the archdiocese this week after about a dozen siblings at the school did not get offered a place.

It said offers for all junior infant places were issued this week to parents and more than 40 children have been placed on a waiting list. Of these, it said, about a dozen have siblings in the school.

The letter states that many of these siblings live within minutes of the school but now have no guarantee they will be able to join their older brothers and sisters.

“There are children who are due to turn five in October 2021 who, as things currently stand, will not be starting school in their nearest primary school which their siblings already attend. No reasonable person could make the case that this is an acceptable situation,” the letter states.

The committee says there was no consultation with parents over the change in policy, which they first learned of in September.

“The parents’ association committee of Our Lady’s Grove primary school feels that this policy is unfair to families and that it is not acceptable that parents are put under this considerable stress,” it states.

“We call on you now to reverse the policy urgently, so that no further groups of children and their families go through this.”

A number of other over-subscribed schools in the Dublin and north Wicklow area have reported that siblings have been placed on waiting lists due to the change in admission policies.

Principals of these schools, however, say they are hopeful that most sibling children will be offered places in subsequent rounds.

A spokeswoman for the archdiocese said the idea behind the admission policy was that a “parish school is established for the children of the parish”.

She said the policy being applied across its schools has been the position of the archdiocese for many years and was now being standardised.

In practice, however, many schools say they have been operating sibling-first policies for years without any complaint.

“The diocesan policy is in place to ensure that siblings and children of the parish can be educated in their local primary school. The majority of Catholic primary schools in the diocese have successfully operated the policy,” the spokeswoman said.

The Department of Education has said the school admissions legislation does not oblige schools to end their sibling-first policies. Other patron bodies such as Educate Together and the Church of Ireland are maintaining these policies.

A number of TDs in the Dublin area have called on the archdiocese to review its policy.

“It needs to be fair system which takes account of the fact that children have siblings in a school. The changes are causing stress and anxiety for many parents,” he said.