Revenue relents on strict rules to help save jobs and businesses 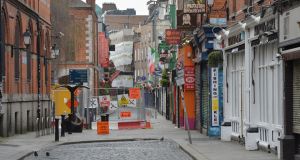 Companies that narrowly missed a deadline to qualify for the temporary Covid-19 wage subsidy scheme should be shown some leniency, the Green Party has said. Photograph: Alan Betson

Companies that missed a Revenue deadline to qualify for the Covid-19 temporary wage subsidy have been given a lifeline by the Revenue Commissioners.

The emergency support scheme, which pays up to 85 per cent of take-home wages up to €410 a week, was designed to ensure that companies were able to keep workers on their books despite the economic crisis. But many companies were locked out of the scheme after failing to file their payroll data with Revenue on time.

The Revenue Commissioners announced on Friday that it will now permit those employers to avail of the scheme as long as the employees in question were on the company payroll at the end of February and those details were submitted to Revenue by April 1st. The original deadline had been March 15th.

Companies must have filed all previous monthly payroll data by the March 15th deadline.

Revenue had turned down appeals from companies that had narrowly missed the deadline, saying that it was bound by the legislation which specifically stated compliance with the payroll return date as a condition for entry to the scheme.

The Department of Finance had noted that the deadline had been put in place to prevent abuse of the scheme.

Revenue said it had loosened the rules for companies looking to enter the scheme “having regard to the overarching ambition of the TWSS [temporary wage subsidy scheme] to maintain links between employers and employees to the greatest extent possible”.

“Any employers that were previously unable to access the TWSS and who meet the revised criteria are now included in the scheme,” the tax authorities said in a statement.

Revenue also noted that employees who were laid off after February 29th, could be taken back on to the payroll for the purposes of the scheme.

A number of companies had said that they would have to let staff go because they found themselves locked out of the emergency programme.

Separately, it has emerged that women who were on maternity leave in February but who have since returned to work have also been excluded from the emergency support scheme as they were not on the company payroll at the end of February. Although they were employees at the time, they were in receipt of social welfare maternity pay and so were not included in the payroll data.

Many of those affected are among the lower paid, who are most vulnerable in the current economic shutdown. The latest Revenue climbdown will not accommodate these women.