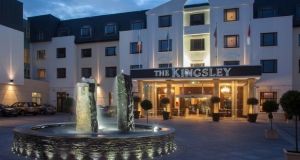 A Cork hotel, which opened its doors in April to cater for frontline HSE staff combating Covid-19, is to close temporarily after two of its staff tested positive for the virus in recent days.

A Cork hotel, which opened its doors in April to cater for frontline HSE staff combating Covid-19, is to close temporarily after two of its staff tested positive for the virus in recent days.

The Kingsley Hotel on the Carrigrohane Straight in Cork city closed when the pandemic struck in March but in April, it opened its doors and 130 rooms to cater for frontline HSE staff involved in combating the infection.

But now the Kingsley, which is owned by Chinese hotel operators, the Kang Family Worldwide Group, has been forced to close again after two staff members tested positive for Covid-19.

Kingsley Hotel General Manager, Fergal Harte posted on the hotel’s Facebook page on Wednesday that the hotel was closing temporarily and management and staff were working with the HSE to contain the outbreak.

“In recent days two members of our team have tested positive for Covid-19. We are currently working with the HSE and are following all appropriate best practice protocols,” said Mr Harte in the post.

“As a precautionary measure and in the interest of the safety of our staff and guests, we have independently taken the decision to close the hotel today, Wednesday, October 7th 2020, for a short period of time.

“We would like to wish the team members concerned a full and speedy recovery. We would also like to thank our guests and members for their support and understanding at this time.”

Mr Harte apologised for any inconvenience caused by the decision but said that he and his staff look forward to welcoming guests back to the four star luxury hotel built which was built in the 1990s on the site of the old Lee Baths.

The hotel, which is on the flood plain of the River Lee was closed for several years after it suffered severe flood damage in 2009 but re-opened in 2014 when it was purchased by the Kang Family Worldwide Group for €6 million.

The Kang Family Worldwide Group, which is headquartered in Beijing, also bought the luxury Fota Island Resort in East Cork from Nama for around €20 million in 2013 and operates it through a subsidiary, Xiu Lan Hotels Ltd.