Referendum may be needed for Dying with Dignity Bill, says Gino Kenny 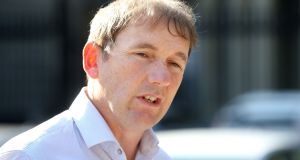 Solidarity-People Before Profit TD Gino Kenny, whose Dying with Dignity Bill faces faces significant resistance from members of the medical profession. ‘It is not going to be straightforward and it is difficult to know where it will go.’ Photograph: Sam Boal/RollingNews.ie

People Before Profit TD Gino Kenny has warned that progression of his Dying with Dignity Bill will not be straightforward and a referendum may still be needed.

While Mr Kenny welcomed the Dáil vote to allow the Bill move to the Oireachtas Committee on Justice, he said the outcome of that examination is unclear.

The legislation provides for people with progressive terminal illness to decide the timing of their own death and avail of assistance to end their lives under controlled and monitored circumstances.

“It will hopefully move to the committee in the next four to six weeks and there will be witnesses from the medical side, the legal side and the patient side,” said Mr Kenny.

“It will take the guts of around four to six months for a report on that process to be produced. It is not going to be straightforward and it is difficult to know where it will go.

“There could be a scenario where this never sees the light of day and gathers dust but, because of the cross-party support so far, I think that is unlikely.”

He said the committee report could also call for a referendum or citizens’ assembly.

The legislation faces significant resistance from members of the medical profession. Some 17 consultants and professors earlier this week wrote to The Irish Times and said they were “gravely concerned” by the plans.

“We worry that the most vulnerable are those who may be made to feel a burden to their families and come under pressure to end their lives prematurely,” said the letter, which was co-signed by members of the Irish Palliative Medicine Consultants’ Association.

“We are convinced that as dying with dignity is already present within healthcare in Ireland, no change to our current laws is required.”

Prof Desmond O’Neill, a specialist in geriatric medicine, also called on politicians and the media to understand that “this is a fundamental issue of human rights and solidarity and resist the temptation to portray this as adversarial combat between liberals and conservatives, or religion and secularism”.

Roscommon Galway TD Denis Naughten said there are a number of outstanding questions including around what safeguards would be put in place to ensure that those requesting such assistance “are not doing so out of compulsion or because their decision-making capacity is compromised by illness, anxiety or depression.”

Speaking about the Bill, Mr Kenny said it was a “significant” step forward, however, that a majority of TDs backed the legislation by 81 to 71 after a free vote for all TDs.

Meanwhile, the Catholic Bishops have said doctors and nurses should never be required to assist in the deliberate ending of life. They have asked people “to consider the manner in which assisted suicide and euthanasia undermines the whole ethos of healthcare”.

In a statement, they warned that “once assisted suicide is accepted in principle, it becomes very difficult to draw a line. Many countries, which began by legalising assisted suicide on a very limited basis, have moved on to widen significantly the scope of that legislation.”