The big switch-off: How should schools tackle smartphone use?

France has banned them; New York has eased its restrictions. What’s best for Ireland? 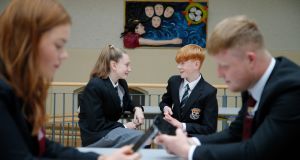 Newbridge College, Kildare, is phasing in a total ban on smartphones for first and second year students. The success of the measure will be evaluated at a later date. Senior students Meabh Breen and Rob Scully (foreground), with first years Kallie Walsh and Eanna Sherlock in the background. Photograph: Nick Bradshaw 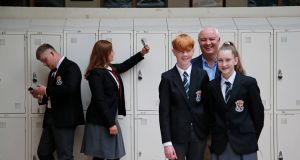 It’s the big switch-off. Last month, France’s education ministry introduced a smartphone ban after lawmakers passed what they called a “detox” law for a younger generation increasingly addicted to screens.

The new law bans phone use by children in school playgrounds, at break times and anywhere on school premises until about the age of 15. It hopes schoolchildren will pay more attention in class and interact more.

But some experts are sceptical that the ban can be enforced, and some teachers question the merits of insulating children from the internet-dominated world they will face outside school.

New York, for example, which had a similar ban in place, ended up lifting it due to patchy enforcement and frustration among parents who were unable to contact their children. (In fact, the ban led to businesses sprouting up near schools that charged students $1 day to hold on to their phones during school hours.)

What’s the best policy for Irish schools? A zero-tolerance approach? Bans during class hours? Or is there a third way where phone use can be managed?

All schools in Ireland are now required to consult with the school community, including teachers, students and parents, on the use of smartphones and tablet devices in schools.

There’s no denying the prevalence of phones among young people: a recent CyberSafeIreland survey of more than 5,000 parents, teachers and children found that just under 70 per cent of children between the ages of eight and 13 own their own smartphone and are on social media.

Teachers, however, say smartphones can be a distraction in class, and students themselves say the phones have become a potent weapon in a bully’s arsenal.

Most primary schools already have a ban during school hours: phones are either handed in on arrival or switched off and left in schoolbags.

Blennerville National School in Kerry has attracted a lot of attention for its move to ban them both in school and at home, with the support of parents.

It gets trickier at second level: many secondary schools have “bring your own device” policies for certain classes, while some schools are putting bans in place during school hours.

Newbridge College, a co-educational school in Kildare, has gone a step further and is phasing in a total ban on smartphones being brought to school.

“We felt we needed to address the social, cognitive, emotional and psychological issues related to smartphone use, so we brought in a pilot ban for first-year students,” says the school’s guidance counsellor, Brian Howard.

“We saw that the kids were more social with each other and the incidence of bullying dropped. Children who might have difficulty socialising had previously used the phone as a crutch, so they didn’t have to communicate with their classmates, but the ban changed that. They could pay more attention in class.”

The ban started with first years and was kept in second year, so it may eventually reach as far as the sixth years, although this will be subject to review and discussion.

There may be another option to managing children’s phone time: turning smartphones into dumb phones.

Macartan Mulligan is the founder of Xerofone, a wifi and 4G signal-blocking technology that effectively disables social media, internet access or camera functionality on students’ phones, with their consent.

“The school inputs the phone numbers, the phone user downloads the software and then the school simply presses a button, which turns off 4G on all those phones for a set period, usually the full school day,” says Mulligan.

“They still have their phone, but they don’t get sucked in to social media, and Xerofone can be turned off if a teacher wants them to use smartphones for certain apps. It doesn’t track their movements and it can’t be used to check their posts or messages.

“Individual students tell us that it’s taken away the pressure for them to be on social media during the day.”

Rockport School, near Holywood in Co Down, trialled Xerofone at the end of the last year.

Headmaster George Vance says hey didn’t want an outright ban but they had concerns about attention, addiction and bullying, and that Xerofone has addressed this, allowing young people to keep their phones but with some restrictions and limits. He is recommending to the board that they keep the app.

The voice of young people hasn’t figured much in the debate so far, though – presumably on the basis that adults know better.

TDs earlier this year set the age of digital consent – the age below which a person cannot by law make an agreement with an online service provider – at 16.

However, groups such as Barnardos, the ISPCC and the Children’s Ombudsman argued that 13 was more appropriate; 16, they said, was unworkable, ignored the experience of young people and actually exposed them to greater risk.

Harry McCann, who founded the Digital Youth Council four years ago, when he was just 15, to give young people a voice in technology, says they are still too often ignored in the debate.

“Setting the digital age of consent at 16 and hoping that young people won’t use the internet, or banning phones, isn’t realistic. It is simply washing our hands of the issue, when what we really need is to be proactive and educate young people, especially children, about staying safe online.”

McCann says that while primary-school children do not need phones, they can be very useful devices at second level.

He accepts there should be rules and regulation rather than an outright ban, especially for older teens.

“My sister is in school and she is nearly 19. Principals and teachers who tell you that bans lead to happier students are delusional: you can take anything you like off them, except their phone.”

How should parents manage their children’s smartphone time? “Social media comes up more and more with young people in therapy, and parents are not sure what to do,” says Anne McCormack, a psychotherapist based in Skerries, Co Dublin.

“I’ve seen it with children as young as eight; they may not always have their own social media accounts, but they access it – and pornography – through older siblings or other children.”

While there is a usefulness in internet access, she says it is better for primary school children not to have a smartphone.

“I’ve heard of a ‘family phone’, which can be used to keep in touch, but today’s teen expects access to social media and it can be a good tool if used right.

When young people hit the teen years, they embark on a new development task: identity formation. During this time they’re more vulnerable to negative feedback than an adult would be. Impulsivity peaks during adolescence and this can create difficulties, particularly around sexting.

“I’d advise parents to talk to them about who they follow on social media and why, and how it makes them feel.”

She says time limits on social media or phone use are a good approach for parents to take.

“Building in periods of review in relation to the phone, or apps like Snapchat, is also a good idea, as it allows the parent and child to check in on one another.

“It’s important for parents to keep calm and not respond with hostility to a teen pushing them away, as it can create further distance.”