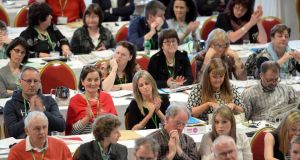 Delegates at the ASTI conference in Killarney: The meeting heard claims that the union lacked a clear strategy. Photograph: Don MacMonagle

The Association of Secondary Teachers, Ireland (ASTI) took the extraordinary step of suspending its annual conference and meeting in private on Wednesday following a wave of criticism from members over its industrial relations strategy.

The meeting heard claims that the union lacked a clear strategy and was “haemorrhaging” younger members who are losing out on pay and access to permanent jobs because of the ASTI’s dispute with the Government.

The union’s rejection of the Lansdowne Road pay agreement has triggered penalties which have resulted in new entrants facing a four-year wait to secure permanent contracts instead of two years. Members are also losing thousands of euro in increments and allowances.

Noel Buckley, a member of the union’s Tipperary branch, said many members were increasingly disillusioned with the direction of the union.

“We cannot continue to haemorrhage members. We cannot dismiss the fact that 450 or 500 members have left the union. There is something wrong with a union when members walk away,” he said.

Anne-Marie Daly, a member of the Cork South branch who works in a dual-union school, said the ASTI membership in the school had fallen from 47 to 19 in recent months. Many of her non-ASTI colleagues, she said, refused to speak to her because of the union’s stance.

“I am one of those people who walks down the corridor every day and 20-odd members of staff put their heads to the floor,” she said. “That is what people are going through,” she said.

Other members said they needed to be able to return to their staff rooms with something to show to younger members who were being “thrown over the top” of the union.

Brian Donoghue, a member of the East Cork branch, said he had seen “crying teachers” unable to get contracts.

ASTI president Ed Byrne insisted reports of haemorrhaging numbers were not true and said the union’s overall numbers were close to 18,000.

There was also criticism that the union had been outmanoeuvred by the Department of Education over supervision duties.

Mary Slattery, a member of the Tipperary branch, said : “What the hell is happening with supervision in our schools? We voted to get out of this, we’re still doing it and – worse – we are doing it for free.”

Elaine Devlin, a member of the Dundalk branch, said it was “sad” and “tragic” that members were carrying out supervision duties for free.

“Let’s wake up and smell the roses and see the disillusion which is happening before us,” she said.

Defending the union’s position, Mark Walshe, a standing committee member, said attempts to change the union’s strategy were an attempt to undermine the democratic will of members who had voted to reject the Lansdowne Road agreement.

The union met on Wednesday evening in a private session for two hours to discuss issues around its campaign strategy and is due to present a number of fresh motions to the annual conference on Thursday.

Issues around infighting at the union were also highlighted during another day of stormy debate. The conference heard details of allegations that the ASTI’s head office staff have lodged formal complaints over bullying and mistreatment by members of the union.

Ms Devlin told the conference the allegations were ironic at a time when the union itself was trying to protect teachers from mistreatment.