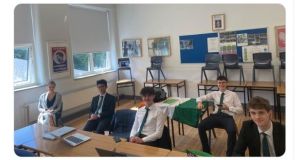 The Irish team has reached the semifinals of the World Schools Debating Championship. Photograph: Twitter

The national Irish schools debating team has progressed to the semifinals of the World Schools Debating Championship.

The team beat Israel 6-1 to make it to the semifinals and are the last European team left in the competition.This is the first time an Irish team has progressed to a semifinal since 2014, with 49 countries participating in this year’s tournament.

They are coached by volunteers Christopher Costigan and Rory O’Sullivan. The competition was originally supposed to take place in Mexico but the team is now participating online, hosted by CBC Monkstown Park, due to Covid-19.