Give me a crash course in … school waiting lists 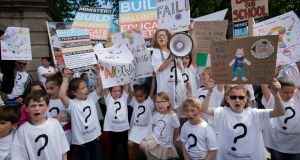 Why are school waiting lists in the news?

The Department of Education is planning to phase out the practice of schools being allowed to admit children on a first-come, first-served basis. It means many parents who believed they would guarantee a school place for their children by placing their names down for schools shortly after they were born stand to lose this advantage.

Does this mean there’s no such thing as guaranteed school places anymore?

Not necessarily. It is understood that Department of Education officials are planning to introduce a three to five-year lead-in time for the phasing out of waiting lists when new school admissions legislation is enacted.

Who will be most affected?

Many prestigious and over-subscribed second-level schools will be affected. Fee-paying schools such as Blackrock College, Belvedere College and Glenstal Abbey, for example, have the names of very young children on waiting lists. However, plenty of over-subscribed schools also take children’s names years in advance of admission. Many Educate Together schools, for instance, also in high-demand, have first-come, first-served admission policies. They are mostly at primary level, however, so the three- to five-year lead-in time should mean any current parents who have their children’s name down on lists are unlikely to be affected.

So, what’s behind these changes?

The Department of Education says the use of waiting lists for school admission can give rise to discrimination, in particular against people who have newly moved into an area.

Under the reforms, schools could take names only in the year prior to enrolment. This already happens in some schools and is aimed at levelling the playing pitch for all.

Will fee-paying schools lose some of their exclusivity as a result?

Not really. Fees for private schools mean they will be as exclusive as ever. They will also be allowed to discriminate in favour of children of past pupils, though the proportion of these places they can set aside will be capped at 25 per cent. Incidentally, the new school admissions bill will also ban any fees charged by schools in relation to admission, a practice common in over-subscribed and privileged schools.

Is anyone opposing these plans?

There hasn’t been full-throated criticism yet. The National Parents Council (post-primary) has previously voiced concern at the frustration it may cause many parents, while the school management body for most second-level (and fee-paying) schools wants a long lead-in time to ensure schools and parents have time to adapt.

Principals of a number of south Dublin secondary schools say they expect legal actions from some parents who end up losing automatic school places as a result. In fact, one principal has advised parents to continue to place children’s names down on waiting lists on the basis they can argue they had a “legitimate expectation”.

The legislation is due to be debated in the Oireachtas shortly. The schools admissions bill was due to come into force from September of this year, though this won’t happen due to legislative delays. It now looks more likely that new rules will come into force from September 2018. A five-year lead-in time would mean that children entering a school up to September 2022 would not be affected.