Delay in opening Ballinteer Educate Together ‘not right’ 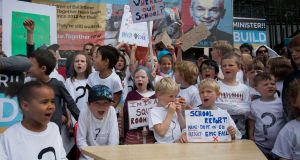 Schoolchildren from Ballinteer Educate Together during a protest at Leinster House, Dublin, over delays in providing a new school building. Photo: Gareth Chaney/Collins. 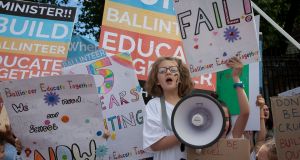 Schoolchildren from Ballinteer Educate Together during a protest at Leinster House, Dublin, over delays in providing a new school building. Photo: Gareth Chaney/Collins.

Parents and children of a south Dublin primary school protested outside Leinster House on Tuesday to highlight delays in building a new school which has left students in temporary accommodation for five years.

Ballinteer Educate Together opened in 2012 but is still waiting for a permanent home due to planning difficulties.

The school is currently using classrooms borrowed from St Tiernan’s secondary school and a number of half-size prefab units.

It is due to move to different temporary accommodation on the grounds of Notre Dame school in Churchtown in September, where it is likely to spend at least another two years, according to staff.

Parents who gathered as part of the protest said the delays were a source of ongoing uncertainty and anxiety.

Dudley Colley, from Dundrum, said his daughter was being taught in cramped conditions and had been told to leave her schoolbag at home due to overcrowding.

“I’m 35 years out of primary school, and my school conditions were far better. That’s not right,” he said.

Darina Mulligan, whose two children attend the school, said parents were frustrated at having to make new arrangements for transport and after school care due to the latest move.

“We’re going to be moved to other temporary accommodation in September, and we’re still waiting for the Department to put in planning permission for the new school. We can’t understand what they delay is,” she said.

Green Party TD Catherine Martin said the lack of communication over the status of a new school building was contributing to uncertainty.

“Instead of being told of anything officially, they are finding out news through word-of-mouth or on social media. It’s unsatisfactory,” she said.

“There are 24 school days left and they still don’t know what kind of temporary accommodation they’ll have in Churchtown, where they’re going, what facilities they’ll have.”

In a statement, a spokesman for Minister for Education Richard Bruton said his department was working with local authorities to resolve complex planning matters linked to the school as soon as possible.

However, he said there had been “strong local opposition from some local interests” over access issues relating to the planned development.

The spokesman acknowledged that the school was in in temporary accommodation “significantly longer than anticipated” due to these issues.

“In the circumstances, the department has resolved the immediate issue impacting on Ballinteer Educate Together relating to the sufficiency of accommodation by allocating space on the recently-acquired Notre Dame campus,” he said.

“This has been welcomed by the patron body - Educate Together - which has expressed itself very happy with the initiative.”